The Leader In Me (How School and Parents, Around The World Are Inspiring Greathers, One Child At a Time) (Paperback) 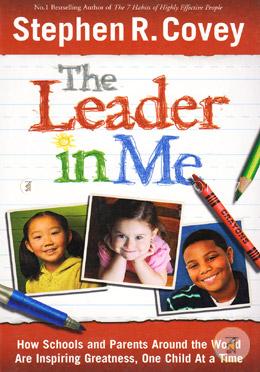 The Leader In Me (How School and Parents, Around The World Are Inspiring Greathers, One Child At a Time) (Paperback)

Children in today's world are inundated with information about who to be, what to do and how to live. But what if there was a way to teach children how to manage priorities, focus on goals and be a positive influence on the world around them?

The Leader in Me is that programme. It's based on a hugely successful initiative carried out at the A.B. Combs Elementary School in North Carolina. To hear the parents of A. B Combs talk about the school is to be amazed. In 1999, the school debuted a programme that taught The 7 Habits of Highly Effective People to a pilot group of students. The parents reported an incredible change in their children, who blossomed under the programme. By the end of the following year the average end-of-grade scores had leapt from 84 to 94.

This book will launch the message onto a much larger platform. Stephen R. Covey takes the 7 Habits, that have already changed the lives of millions of people, and shows how children can use them as they develop. Those habits -- be proactive, begin with the end in mind, put first things first, think win-win, seek to understand and then to be understood, synergize, and sharpen the saw -- are critical skills to learn at a young age and bring incredible results, proving that it's never too early to teach someone how to live well.

About The Author
Recognized as one of Time magazine's 25 most influential Americans, Stephen R. Covey has dedicated his life to demonstrating how every person can truly control their destiny with profound, yet straightforward guidance. As an internationally respected leadership authority, family expert, teacher, organizational consultant and author, his advice has given insight to millions. He has sold over 20 million books sold (in 38 languages), and The 7 Habits of Highly Effective People was named the No. 1 Most Influential Business Book of the Twentieth Century. His most recent major book, The 8th Habit , has sold nearly 400,000 copies. He holds an MBA from Harvard, and doctorate degree from Brigham Young University. He is the co-founder and vice chairman of FranklinCovey, the leading global professional services firm with offices in 123 countries. He lives with his wife and family in Utah.