Murphy puts forth the theory that the subconscious mind has profound influence on everything an individual does and experiences. He insists that if an individual unreservedly believes in something and clearly pictures it in his mind, he/she succeeds in removing all the mental blocks that stand between the vision and the reality. He concludes that every individual can manifest a successful reality just by wholly and truly believing in it.

Murphy has combined scientific research with spiritual philosophy to create numerous techniques to control the incredible power of the subconscious mind. The techniques provided in the book are simple and invaluable. They are not merely theoretical in nature, but are backed by numerous real-life cases in which the techniques have proven highly effective.

The exercises and guidelines provided are highly practical, and can be adopted by absolutely anybody to uncover the secrets of prosperous living. These exercises provide a wide range of benefits. They can be used to overcome bad habits, compulsions, and phobias, strengthen relationships, build confidence, cure ailments, improve health, fight aging, and be successful.

The book helps each reader explore and utilise the latent power granted to every human being - the power of the subconscious.

The Power Of Your Subconscious Mind was originally published in 1963. This particular edition is a revised edition by Ian McMahan. It was published in 2006.

About The Authors
Joseph Murphy was an American author of Irish origin. He was also a New Thought minister ordained in Religious Science and Divine Science. Some of Murphy’s works include The Miracles Of Your Mind, The Power Of Your Subconscious Mind, Secrets Of The I Ching, Your Infinite Power To Be Rich, Living Without Strain, Songs Of God, and Within You Is The Power.

Murphy was born on May 20, 1898, in Ireland. He joined the Jesuits after studying for priesthood. In his twenties, he moved to the United States of America and became a pharmacist. He turned the Los Angeles Divine Science Church into one of the most prominent New Thought congregations in America. Murphy held degrees in chemistry and psychology. He was married twice. He passed away in 1981 in Laguna Hills, California.
Ian McMahan is a researcher, lecturer, and teacher in the field of motivation.
He has written books like Secrets Of The Pharaohs, and Get It Done!: A Guide To Motivation, Determination, and Achievement. He holds a PhD as well.

Joseph Murphy (May 20, 1898 - December 16, 1981) was an Irish born, naturalised American author and New Thought minister, ordained in Divine Science and Religious Science.Murphy was born in Ireland, the son of a private boys' school headmaster and raised a Roman Catholic.After his first wife died in 1976, he remarried to a fellow Divine Science minister who was his longstanding secretary. He moved his ministry to Laguna Hills, California, where he died in 1981. 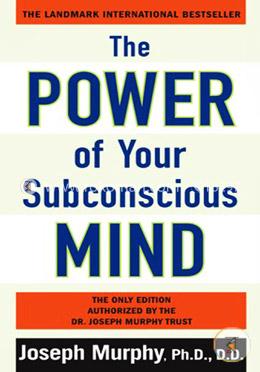 The Power Of Your Subconcious Mind

How to Use Your Healing Power