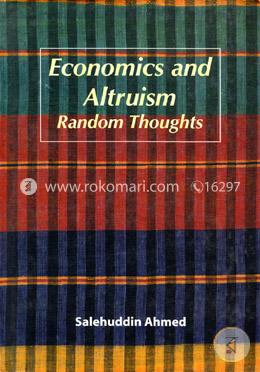 Bertrand Russell once wrote in The Modern World, economics and war are the main motives for social cohesion. War now has taken an overwhelming role in the present day world. Economics of simple profit making‚and‚ rent seeking‚ has also not made our lives more decent and peaceful. Therefore, what we need is economic actions mediated by moral values and ethical considerations to make this world more cohesive and peaceful. Articles and papers included in this volume consist of a wide array of subjects like the social roles of professionals, ethical issues on inequality, poverty alleviation, local governance, role of NGOs, fiscal policies, microcredit and management of development. It is altruism which provides the common thread connecting the essays and the issues discussed in this book. Robert Chambers, who pioneered the practical tools of rapid rural appraisal (RRA) implored everybody to give importance to altruism. That does not mean that one should only be an armchair economist or a social scientist brooding about the miseries of people one must also act. The book should provide serious students of economics and other social sciences basic ideas on issues highlighted. The casual reader will get a guided tour on how altruism and practice can be combined for the benefit of mankind. Salehuddin Ahmed is Managing Director (CEO) of Palli Karma-Sahayak Foundation (PKSF), the apex funding agency of microcredit operations in Bangladesh. He obtained his Ph.D. in Economics from McMaster University, Canada in 1978. He started his career as a teacher in Economics at Dhaka University and then joined the civil service of the government. He worked at the Centre on Integrated Rural Development for Asia and the Pacific (CIRDAP). He was Director General of Bangladesh Academy for Rural Development (BARD), Comilla and also Director General of the NGO Affairs Bureau. He has authored more than 60 books, reports and journal articles which have been published at home and abroad. He is on the advisory bodies of several government and non-government agencies in Bangladesh