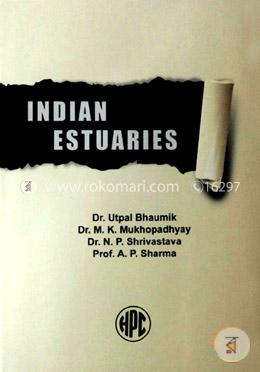 About the Book
Book on Indian Estuaries aims at fulfilling long awaited demands of college and university students, researchers, policy makers, managers and also nature lovers of the country and abroad. The authors devoting entire or considerable part of research career on toiling and investigating vast and mighty to remotest and toughest estuaries of the country, have put down analytical accounts of their findings integrating references of other infield workers of the country and abroad too. Spread over 265 pages the text inclusive of graphics and diagrammatic illustrations, photo plates and maps indeed is an in hand knowledge bank on ecology, fisheries and manifestations of mankind effects on Indian estuaries.

Available research information on estuaries from various corners of the country has been considered for comprehensive presentation and narration of the ecological characteristics of individual and also comparative analysis of inter and intra coastal estuarine systems. When or wherever necessary, the studies of global researchers especially in the area of basic structure and features of estuaries have been incorporated to make the book useful for the beginners and also the readers not conversant with the subject.

Looking at the urgent need for a book that asks what has, and what has not been done; and ascertains the directions, in which current and future research will lead, the contents have logically been placed under four chapters.

Chapter One on general account includes definition of estuary, process of formation and classification of estuaries on the basis of salinity and climatic conditions. Aspects like circulation, sedimentation, residence time and stratification in estuaries have been detailed. Physico-chemical and biological properties have been discussed in general along with food-web observed in the estuaries.

Hooghly estuary representing north-east estuarine group has exhaustive narration of the system. Changed eco-biological scenario under the influence of freshwater diversion from river Ganga through the Farakka barrage analysed critically and discussed in view of use and abuse of the installed hydro regulatory structure. Various methods of toxicity investigations adopted in the system narrated with their suitability and efficiency for the purpose. Account on pollution status and impact of Ganga Action Plan have detailed discussion.

Mahanadi estuary selected too for the north-east zone has been presented for projecting the effect of excessive river water control on hydro-morphometric and eco-physiological characteristics of the system.

Krishna estuary falling in the south-east zone happens to be one, which receives negligible river water from the barrage upstream. Sea-fed characteristics of the system prominent over the years have been discussed for projecting future of similar other estuaries from ecological losses in the context of complete or excessive diversion of the river water overlooking the sustenance of requirement of the downstream river course.

Narmada estuary representing north-west zone is most important from fisheries point of view. There has been considerable fall in the fish production during post Gandhi Sagar Dam periods. Successive

changes in the eco-biological status of the system were spelt out especially dominance of marine species in the lower estuarine zone. Impact of industrial contamination has been discussed in detail and measures suggested accordingly.

At the end in Chapter Four, management issues for the estuaries have been dealt with. Aspects like resource conservation, policies and planning have elaborate presentations along with examples and cases studies from various countries of the world.

General account of estuary, resource over view, system analyses and management outlines drawn therein would not only educate the learners and researchers but also the policy makers and managers interested in understanding and protecting the precious estuarine systems of the country.