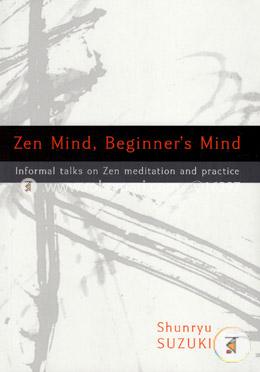 PREFACE
Two Suzukis. A half-century ago, in a transplant that has been likened in its historical importance to the Latin translations of Aristotle in the thirteenth century and of Plato in the fifteenth, daisetz Suzuki brought Zen to the west single-handed. Fifty years later, Shunryu Suzuki did something almost as important. He sounded exactly the follow-up note Americans interested in Zen need to hear.
Whereas Daisetz Suzukis Zen was dramatic, Shunryu Suzuki`s is ordinary. Satori was focal for daises, and it was in large part the fascination of this extraordinary state that made his writings so compelling. In shunryu Suzuki’s book the words satori and kensho, its near-equivalent, never appear.
When, four months before his death, I had the opportunity to ask him why satori didn’t figure in his book, his wife leaned toward me and whispered impishly, “It’s because he hasn’t had it”; whereupon the Roshi batted his fan at her in mock consternation and with finger to his lips hissed, ``shhhh! Don’t till him!” When our laughter had subsided, he said simply, “It’s not that satori is unimportant, but it’s not the part of Zen that needs to be stressed”
Suzuki-roshi was with us, in America, only twelve years a single round in the East Asian way of counting years in dozens but they were enough. Through the work of this small, quiet man there is now a thriving Soto Zen organization on our continent. His life represented the Soto way so perfectly that the man and the way were merged. “His nonego attitude left us no eccentricities to embroider upon. Though he made no waves and left no traces as a personality in the worldly sense, the impress of his footsteps in the invisible world of history lead straight on” * His monuments are the first Soto Zen monastery in the west the Zen Mountain Center at Tassajara; its city adjunct, the Zen Center in san Francisco; and, for the Public at large, this book.
Leaving nothing to chance, he prepared his students for their most difficult moment, when his palpable presence would vanish into the void:
If when I die, the moment I’m dying, if I suffer that is all right, you know; that is suffering Buddha. No confusion in it. Maybe everyone will struggle because of the physical agony or spiritual ago one, too. But that is all right, that is not a problem. We should be very grateful to have a limited body like mine or like yours. If you had a limitless life it would be a real problem for you.
And he secured the transmission. In the Mountain Seat ceremony, November 21, 1971. He installed Richard Baker as his Dharma heir. His cancer had advanced to the point where he could march in the processional only supported
*From a tribute by Mary Farkas in Zen Notes, the First Zen Institute of America, January 1972.

Shunryu Suzuki was born May 18, 1904. His father, Butsumon Sogaku Suzuki, was the abbot of the village Soto Zentemple His mother Yone was the daughter of a priest and had been divorced from her first husband for being too independent. Shunryu grew up with an older half-brother from his mother's first marriage and two younger sisters. As an adult he was about 4 feet 11 inches (1.5 m) tall. In 1924 Shunryu enrolled in a Soto preparatory school in Tokyo not far from Shogan-ji, where he lived on the school grounds in the dorm. From 1925 to 1926 Suzuki did Zen training with Dojun Kato in Shizuoka at Kenko-in. He continued his schooling during this period. In 1925 Shunryu graduated from preparatory school and entered Komazawa University, the Soto Zen university in Tokyo. On August 26, 1926, So-on gave Dharma transmission to Suzuki. He was 22. Suzuki founded San Francisco Zen Center, which along with its affiliate temples, comprises one of the most influential Zen organizations in the United States. A book of his teachings, Zen Mind, Beginner's Mind, is one of the most popular books on Zen and Buddhism in the West.He died December 4, 1971 in San Francisco, California, U.S.A.

Not Always So: Practicing the True Spirit of Zen