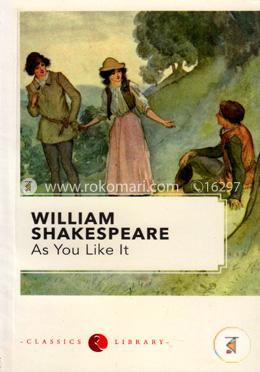 'As You Like It' Summary of the book
As You Like It is typical of Shakespeare’s great comedies in many respects. The action of the play occurs in two locales, so that the values taken for granted at court may be presented for examination in the foreign setting of the forest. What might be described as the pattern of pastoral comedy is played out in this drama. The heroes and heroines of the play are forced to leave the city and retreat to the forest, where they learn the simple values of rustic life.
The dramatic action is precipitated by the usurpation of the country’s throne by Duke Frederick, who deposes his elder brother, Duke Senior. When the play opens, Duke Senior has retreated to the forest of Arden. His daughter Rosalind has been allowed to remain at court, but her popularity makes Frederick jealous, so she too is banished. Frederick’s daughter Celia, bound to Rosalind by strong ties of affection, accompanies her to Arden. They are pursued there by Orlando, also a victim of persecution; his older brother Oliver hates him simply because he also is popular. In the forest, Rosalind disguises herself as a man for safety’s sake. Her disguise allows her to test Orlando’s love and to offer sage advice to other pairs of lovers, notably the shepherd Silvius and his beloved Phebe; the fool, Touchstone, and the object of his desire, Audrey; and Celia and Oliver who, while visiting Arden in search of his brother, is converted miraculously from his hatred for Orlando when the latter saves him from an attack by a lioness.
In the forest of Arden, Rosalind and Orlando discover what mature love really is: not something simply earthy or entirely ethereal, but rather a total, healthy appreciation of the beloved that allows one to recognize faults but forgive them readily. The other three pairs of lovers serve as counterpoints to Rosalind and Orlando, representing the various forms of incomplete love. Throughout the play, the lovers are reminded of the tenuous nature of their feelings by the melancholic Jacques, who sees that all human efforts eventually end in death. The fool Touchstone, whose name signifies his role as a judge of others’ actions, also serves to call the other characters “back to earth” in a way, pointing out the irrationality of so much of their behavior when they are spurred on by love.
At the end of the play, however, all four pairs of lovers are married, signifying what for Shakespeare is the proper culmination of sensible courtship. The triumph of love at the end of the drama suggests Jacques’s cynical view of life and society can and must be overcome if people are to create a harmonious society. Even Duke Frederick is cured of his greed and reconciled with his brother when he pursues the fugitives into the forest. It is significant, too, that most of those who have come into this magic land of Arden agree to return to the city after the marriage ceremony. There, presumably, they will live more wisely and fully, having learned the power of love and its role in perpetuating what is best in society.
(MASTERPIECES OF WORLD LITERATURE, CRITICAL EDITION)