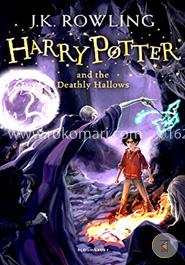 'Harry Potter and the Deathly Hallows' Summary of the book
Following another deeply troubled year at Hogwarts, described in Harry Potter and the Half-Blood Prince, at the end of which Dumbledore is killed by the ever-deceptive Severus Snape, Harry begins the final volume of the series in hiding. When the spell that has kept him safe until his seventeenth birthday expires, he and his helpers are immediately attacked by Voldemort, suffering casualties.
Unable to return to Hogwarts, Harry is forced to go on the run with Ron and Hermione, hunting desperately for the “horcruxes” that contain fragments of Voldemort’s soul and thus maintain his invulnerability. The search for the horcruxes is complicated when Harry learns of the existence of another set of magical objects—the “deathly hallows”—which might also be vital to the settlement of the final battle. Voldemort is unable to give his complete attention to the quest to kill Harry because he is searching for one of the hallows: an undefeatable wand.
Uncertain as to whether to give priority to the remaining horcruxes or the hallows, Harry continues to evade death, albeit narrowly, until he is forced to return to Hogwarts in order to complete his search. The castle housing Hogwarts Academy then becomes the last fortress holding out against Voldemort’s rise to power, subject to intensive siege and violent bombardment.
The remnants of Dumbledore’s Army and the Order of the Phoenix mount a heroic defense of Hogwarts in the attempt to win Harry enough time to finish his quest, suffering heavy casualties in the process. The conflict reaches the limit of desperation when it becomes evident that Harry harbors one of the fragments of Voldemort’s soul in his own flesh. It appears that Harry cannot kill his enemy without sacrificing himself in the process, but that sacrifice might also make Voldemort invincible.

Harry Potter and the Philosopher's Stone