“Nineteen Eighty-Four” Book Introduction
George Orwell, born Eric Arthur Blair, was a much-respected English novelist, political author, and journalist who wrote some of the finest pieces in literary criticism, poetry, fiction, and polemical journalism. Born on June 25, 1903 in Bihar, India, to a Civil Servant who worked in the then legal opium trade, Orwell moved to London with his mother and elder sister at the age of one. He started his schooling at St Cyprian's, which he referred to as "a lukewarm bath of snobbery', and later won a scholarship to Eton, but didn't perform well there, perhaps by choice. Having no other option left, he signed up for the Indian Imperial Police and left for Burma (modern-day Myanmar) in 1922. Having grown to hate imperialism and keen to start a fresh career with writing, Orwell returned home in 1927 and moved to Paris. During his years in Paris, he wrote numerous short stories and articles, but he didn't achieve much success with either. He came back to London after he fell seriously ill, and it was here that he wrote under the pseudonym George Orwell for the first time. His first work under this pen-name was Down and Out in Paris and London, a memoir-cum-travelogue themed on poverty in the two capital cities. Considered perhaps the twentieth century's best chronicler of English culture, Orwell's work is known for its simplicity, astuteness, and wit. His writing is mainly within the genres of dystopia and satire, and he wrote with great cleverness on subjects such as anti-fascism, democratic socialism, totalitarianism, and the anti-Stalinist left. He used his fiction writing, as well as his journalism, to defend his political convictions. Orwell's work continues to feed popular and political culture. Many of the words coined by him, such as 'doublethink', 'thought crime', 'Big Brother, and 'thought police', have found a place in popular jargon today.
His best works include Animal Farm, Nineteen Eighty Four, and Homage to Catalonia (which is inspired by his stint in the Spanish Civil War). George Orwell died at the age of forty-six in 1950.

PREFACE
A polemic text, George Orwell's Nineteen Eighty Four is a bold voice that cries out against the cacophony of fascist, communist, and other totalitarian forms of governance. Considered a self-contained critique of the totalitarian state, this Orwellian masterpiece has given the modern world much of its popular political jargon.
Set in Oceania, one of the three intercontinental super states that divided the world among themselves after a global atomic war, the story unfolds in London, the chief city of Airstrip One, governed by the Party headed by the Big Brother. Posters screaming BIG BROTHER IS WATCHINGYOU” clutter every inch of available public and private space in the city. Every street corner, every lamp post, and every wall has life-size pictures of Big Brother's face, his eyes following the wary citizens as they walk past it.
When the book opens, it is a bright cold day in April, the clocks are 'striking thirteen, and the protagonist, Winston Smith, is in the clutches of a dystopian future. The world as we know it has been obliterated by a global atomic war. Those who have survived it are living in what are the ruins of an England already ravaged by World War II, civil conflict, and the political revolution which brought the Party to power. Winston Smith is a member of the Outer Party which consists, almost entirely, of the middle class. He works for Minitrue, the Ministry of Truth, where he is an editor responsible for changing and doctoring the past, day in and day out, to match the Party's ever-changing official version, intended to make the state an omniscient entity. This perpetual engagement with state-sponsored rewriting of history inspires within Winston a dangerous fascination for the true past, and he tries, discreetly, and against the state diktat, to unearth as much of the truth as he can.
In a world where thought crime is death, where a fascination with the true past is an offense punishable by death, Winston starts maintaining a journal criticizing the Party and Big Brother, its enigmatic leader. He writes sitting at his desk in an alcove in his flat, at an angle that hides him from the intrusive eyes of the telescreen, a privacy that is as much a rebellion as it is a rarity, And then one day, in the middle of his daily work and private rebellion, he meets Julia, a young dark-haired mechanic who repairs the Minitrue novel-writing machines. From here begins Winston's fall into an abyss which takes both Julia and him them through love, painful confessions, betrayals and much more.
What George Orwell did in Nineteen Eighty Four was not only ahead of its times, but it was revolutionary as well. And revolutionary in more than one sense. While it commented upon the times to come in a rather ominous prophetic manner-newscasters even today talk about an Orwellian present/future-the text also shed light upon the conditions that defined much of the world when Orwell actually set about writing it. Orwell touched upon a raw nerve as he shaped Winston Smith, giving a voice and a face to all the popular fears and nightmares that were running in everyone's heads about the rot that had set in in the social and political structures of the day.
Can Nineteen Eighty Four, then, be considered to be a prophecy? A prophecy of sorts, perhaps, yes. The text did touch upon problem points that were, then, yet to come, and which, now, are very much a part of the present. It was a warning ahead of its times, a cautionary piece of writing about human freedom being on the verge of enslavement by the chains of political organization and technology, about how power, once acquired, needs absolute sacrifice for the sake of those seeking it and maintaining it.
While Nineteen Eighty Four is often hailed as an excellent piece of modern science fiction literature dealing with dystopian futures, it is also at once a commentary on the ideas of revolution, war, totalitarianism, nationalism, and political geographies. It grapples, at the same time, with such issues as living standards and extreme censorship,
Most of the original novel was written in Jura between 1947 to 1948. During this time, George Orwell himself was seriously ill, suffering from tuberculosis. The book was finally sent to the publisher on the 4" of December, 1948 and published on the 8" of June the following year. The…. 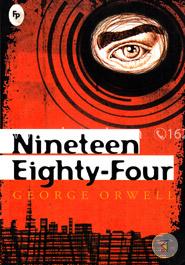