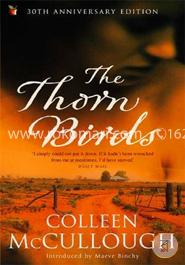 "The Thorn Birds" ‍Summary of the book:
The Thorn Birds is a robust, romantic saga of a singular family, the Clearys. It begins in the early part of this century, when Paddy Cleary moves his wife, Fiona, and their seven children to Drogheda, the vast Australian sheep station owned by his autocratic and childless older sister; and it ends more than half a century later, when the only survivor of the third generation, the brilliant actress Justine O'Neill, sets a course of life and love halfway around the world from her roots.
The central figures in this enthralling story are the indomitable Meggie, the only Cleary daughter, and the one man she truly loves, the stunningly handsome and ambitious priest Ralph de Bricassart. Ralph's course moves him a long way indeed, from a remote Outback parish to the halls of the Vatican; and Meggie's except for a brief and miserable marriage elsewhere, is fixed to the Drogheda that is part of her bones - but distance does not dim their feelings though it shapes their lives.
Wonderful characters people this book; strong and gentle, Paddy, hiding a private memory; dutiful Fiona, holding back love because it once betrayed her, violent, tormented Frank, and the other hardworking Cleary sons who give the boundless lands of Drogheda the energy and devotion most men save for women; Meggie; Ralph; and Meggie's children, Justine and Dane. And the land itself; stark, relentless in its demands, brilliant in its flowering, prey to gigantic cycles of drought and flood, rich when nature is bountiful, surreal like no other place on earth.