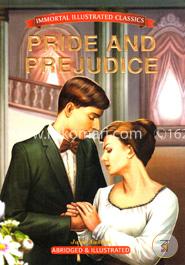 INTRODUCTION
Pride and Prejudice was published in 1913, and is considered a masterpiece. It was earlier written in 1796, under a different title First Impressions. However, no publishing company considered Austen's manuscript at that time. It was only many years later when Jane Austen rewrote the script of First Impressions under a new title Pride and Prejudice, that it was published. Although, the original idea of this novel belongs to a young Jane Austen, the story reflects the maturity of a woman who has experienced life as an adult.
Pride and Prejudice starts with introducing the Bennet family who live in Hertfordshire, fifty miles outside London. The principal objective of Mr. and Mrs. Bennet is to get their five daughters married into well-to-do families to secure their future. They see a potential suitor in the wealthy Mr. Bingley, who moves into Netherfield Park. Bingley shows equal interest in the Bennet's eldest daughter Jane, when he meets her for the first time at the Meryton assembly ball.
Mr. Darcy is Mr. Bingley's close friend and advises Bingley to keep away from the Bennets. Earlier in the story, Mr. Darcy ignores Elizabeth but their paths cross several times and she challenges his contempt with her impertinence. Elizabeth's indifference intrigues the haughty Mr. Darcy who eventually falls in love with her.

This Wonderful story is Ο the Bennet sisters and their lives. The eldest is Jane who is wooed by Mr. Bingley Elizabeth falls for Mr. Darcy after all the prejudice she held against him. Mr. Wickham, Cooks up stories of Mr. Darcy's Fil treatment and how he ruined his future. This false information maligns Mr. Darcy's reputation. Mr. Wickham influences Lydia, who runs away with him. Mr. Collins, the heir to the Bennet estate, is another recurring character who desires to marry one of the Bennet daughters but ends up marrying Elizabeth's friend Charlotte Lucas. All in all, its a Spontaneous and mesmerizing tale.

Jane Austen (16 December 1775 – 18 July 1817) was an English novelist known primarily for her six major novels, which interpret, critique and comment upon the British landed gentry at the end of the 18th century. Austen's plots often explore the dependence of women on marriage in the pursuit of favorable social standing and economic security. Her works critique the novels of sensibility of the second half of the 18th century and are part of the transition to 19th-century literary realism. With the publications of Sense and Sensibility (1811), Pride and Prejudice (1813), Mansfield Park (1814) and Emma (1815), she achieved success as a published writer. She wrote two additional novels, Northanger Abbey and Persuasion, both published posthumously in 1818, and began another, eventually titled Sanditon, but died before its completion. Her novels have rarely been out of print, although they were published anonymously and brought her little fame during her lifetime. A significant transition in her posthumous reputation occurred in 1869, fifty-two years after her death, when her nephew's publication of A Memoir of Jane Austen introduced her to a wider audience.