The Autobiography of Benjamin Franklin  (Paperback) 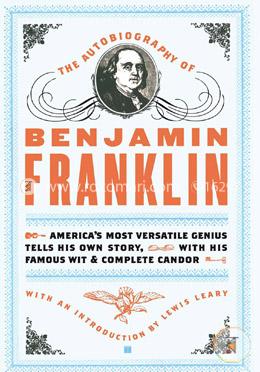 The Autobiography of Benjamin Franklin  (Paperback)

“The Autobiography of Benjamin Franklin" Summary of the Book:
Born 1706 in Boston, Benjamin Franklin was the 15th of his father's 17 children. He went to school as a child with the intent of becoming a minister, as his father, Josiah, intended. However, that idea was dropped after Franklin showed a keen interest in reading and writing. He was apprenticed to his brother, James at a young age, but after fighting with his brother he quit the job and moved to Philadelphia, where he worked for a man named Samuel Keimer. After befriending some prominent political figures, including the royal Governor, Franklin left for England, where he spent 18 months working for a printer with his friend James Ralph, with whom he later became estranged. Shortly after returning to America in 1726, Franklin formed a debating club called the Junto. Two years later, he took over The Pennsylvania Gazette from Keimer and turned it into a successful publication with tools from London. In 1730, Franklin wed his old sweetheart, Deborah Read, with whom he had two children. The first, William Franklin, was born approximately one year later; he is the man to whom the Autobiography is addressed in Part One.
Throughout the 1730s, Franklin held some minor positions doing printing work for the government. In that time, he began Poor Richard's Almanac and became postmaster of Philadelphia. Towards the end of the decade, he invented the Franklin stove. In the 1740s, Franklin worked on several projects, including the fire brigade, the police force, the University of Pennsylvania, the street sweeping service and some other smaller public works projects. He retired from the printing business in 1748 and began to conduct scientific experiments in lightning. In 1753, he was awarded honorary degrees from Harvard and Yale, and he became Postmaster General of America. The following year, when war broke out between England and France (the French and Indian War Franklin began to draft proposals outlining means by which funds could be raised for colonial defense. He succeeded in many of his proposals, and he personally played a large part in organizing the war effort. The Autobiography, however, breaks off in 1757; it is left unfinished.
The Autobiography itself was written in three different times: 1771 in England, 1783-83 in France, and 1788 in America. If Franklin meant to complete it, he died before he got the chance.
Flap Of The Book:
The Private Life of Benjamin Franklin, Written by Himself, became the most popular
ever written. Franklin would have expected no less. It would have given him endless pleasure and delight. He wrote to
be read, by everyone ... He wanted his dear reader - you, dear reader – to reach out, pull that book down - pull this book down - press it open, and read within it the story of his life. But he knew, too, that to pull Franklin down from a shelf and
turn to the first page of the book of his life is to open him up the way the gowned anatomist plunges into a pale and waxen corpse: with a sharp knife.'

Benjamin Franklin (January 17, 1706 – April 17, 1790) was one of the Founding Fathers of the United States. Franklin was a renowned polymath and a leading author, printer, political theorist, politician, Freemason, postmaster, scientist, inventor, civic activist, statesman, and diplomat. As a scientist, he was a major figure in the American Enlightenment and the history of physics for his discoveries and theories regarding electricity. As an inventor, he is known for the lightning rod, bifocals, and the Franklin stove, among other inventions. Franklin earned the title of "The First American" for his early and indefatigable campaigning for colonial unity, initially as an author and spokesman in London for several colonies. As the first United States Ambassador to France, he exemplified the emerging American nation. Franklin was foundation in defining the American ethos as a marriage of the practical values of thrift, hard work, education, community spirit, self-governing institutions, and opposition to authoritarianism both political and religious, with the scientific and tolerant values of the Enlightenment. In the words of historian Henry Steele Commander, "In a Franklin could be merged the virtues of Puritanism without its defects, the illumination of the Enlightenment without its heat. To Walter Isaac son, this makes Franklin "the most accomplished American of his age and the most influential in inventing the type of society America would become. Franklin became a successful newspaper editor and printer in Philadelphia, the leading city in the colonies, publishing the Pennsylvania Gazette at the age of 23. He became wealthy publishing this and Poor Richard's Almanac, which he authored under the pseudonym "Richard Saunders". After 1767, he was associated with the Pennsylvania Chronicle, a newspaper that was known for its revolutionary sentiments and criticisms of the British policies.

The Autobiography of Benjamin Franklin

The Autobiography of Benjamin Franklin