The Adventures Of Huckleberry Finn (Paperback) 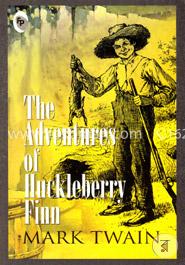 The Adventures Of Huckleberry Finn (Paperback)

'The Adventures Of Huckleberry Finn' Summary of the book
Mark Twain blends many comic elements into the story of Huck Finn, a boy about 13 years old, living in pre-Civil War Missouri. Huck, the novel’s narrator, has been living with the Widow Douglas and her sister, Miss Watson, in the town of St. Petersburg. They have been trying to “sivilize” him with proper dress, manners, and religious piety. He finds this life constraining and false and would rather live free and wild. When his father hears that Huck has come into a large amount of money, he kidnaps him and locks him in an old cabin across the river. To avoid his father’s cruel beatings, Huck elaborately stages his own death and then escapes to Jackson’s Island. He finds Jim, Miss Watson’s runaway slave, on the island, and the two decide to hide out together. To avoid danger of discovery, they decide to float down the river on a raft they had found earlier. Sleeping during the day and traveling at night, they plan to connect with the Ohio River at Cairo, Illinois, which would lead them north into the free states, where slavery is outlawed. They miss Cairo in the fog one night and find themselves floating deeper into slave territory. While they are searching for a canoe, a steamship hits the raft and damages it. Huck and Jim are separated.
Huck swims ashore where he meets the feuding Grangerfords and Shepherdsons. He claims to be George Jackson, a passenger who fell from a steamboat and swam to shore. After witnessing a violent eruption of the feud in which many people are killed, he finds Jim, and they return to the raft.
They continue down the river. Two conmen, calling themselves a king and a duke, find their way to the raft. In one of the towns the king and the duke impersonate the two brothers of Peter Wilks, who has just died and left a small fortune. Huck thwarts their plan to swindle Wilks’ family out of their inheritance. The king and the duke escape, but further down the river the two decide to sell Jim to Silas Phelps, who turns out to be Tom Sawyer’s uncle.
Visiting his aunt and uncle, Tom persuades Huck to join him in an elaborate, ridiculous plan to free Jim. Huck prefers a quicker escape for Jim but caves in to Tom’s wishes. Only after Tom’s plan has been played out, and Jim recaptured, does Tom reveal that Miss Watson had actually freed Jim two months earlier, just before she died. Huck decides to “light out for the Territory,” to head west toward the frontier before anyone can attempt to “sivilize” him again. (enotes.com)