The Girl of My Dreams (Paperback) 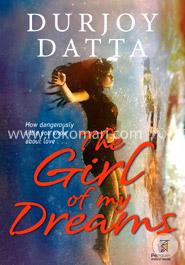 The Girl of My Dreams (Paperback)

'The Girl of My Dreams' Summary of the book
We are in the car She s looking at me. I can see the love in her eyes for me. Then a huge crash. She s flung out of the window. I m thrown out too. A pool of blood. Her eyes are still on me . . . but now it s a death stare. I am Daman and I wake up to this nightmare. Every. Single. Day. Waking up from a long coma Daman learns that he was in a massive car crash with a girl who vanished soon after the accident leaving him for dead. Strangely all he remembers is a hazy face her hypnotic eyes and her name Shreyasi. To come to terms with his memory lapse he starts piecing together stories about himself and Shreyasi from his dreams which he then turns into a hugelypopular blog. When he s offered a lucrative publishing deal to convert his blog pieces into a novel he signs up immediately. However he gives in to editorial pressure andagrees to corrupt the original edgy character of Shreyasi. Big mistake. From then on Daman is stalked and threatened by a terrifying beauty who claims to be Shreyasi and who will stop at nothing to make him pay for being a sell-out. Before Daman fights back he needs to know Is she really who she claims to be? What does she want from him now? What if he doesn t do what she wants him to? The Girl of My Dreams is definitely not your usual love story. About the AuthorDurjoy Datta s first book Of Course I Love You was published when he was twentyone years old and was an instant bestseller. His successive novels Now That You re Rich She Broke Up I Didn t Ohh Yes I Am Single You Were My Crush If It s Not Forever Till the Last Breath Someone Like You Hold My Hand When Only Love Remains World s Best Boyfriend Our Impossible Love have also found prominence on various bestseller lists making him one of the highest-selling authors in India.

Durjoy Datta was born on 7 February 1987 in Mehsana, Gujarat but grew up in New Delhi. He completed his schooling at the Bal Bharati Public School, Pitampura and went on to do mechanical engineering from the Delhi College of Engineering now known as Delhi Technological University. He did his post graduation from Management Development Institute, Gurgaon and also from Frankfurt School of Finance and Management, Germany and majored in marketing and finance. He started writing while he was still in final year of his college. In 2011, he quit his job at American Express as a marketing analyst and turned a full-time writer. In 2012, he was one of the recipients of the Teacher's Achievement Awards. He has also spoken in various TEDx conferences in colleges across India. He served at NIIT Ltd. Siemens AG, and American Express until he co-founded the publishing house Grapevine India in September 2011. In 2009, he was recognized as the young achiever by The Times of India. He was also chosen as one of the two young achievers in the field of Media and Communications by Whistling Woods International in 2011. His debut show Sadda Haq - My Life, My Choice won the Youth Show - fiction category at Zee Gold Awards in 2014 and at Indian Telly Awards in 2014 and 2015. He got married to his long-term girlfriend Avantika Mohan, in March 2016 in her hometown, Dehradun. She lives in Dubai, and is a model and air-hostess by profession. She was crowned as Miss Uttarakhand in 2004. Their daughter, Rayna Datta was born in 29 July 2017.