(Saniyasnain Khan) Son of noted Islamic scholar, Maulana Wahiduddin Khan, Saniyasnain Khan was born in 1959 at Azamgarh, U.P. India. In 1967 he moved to Delhi along with his father. He attended the Mazharul Islam Middle School and the Govt Model Higher Secondary School-2 (Ludlow Castle), Delhi. He subsequently studied at Jamia Hamdard, the University of Delhi and Jamia Millia Islamia. He did his post-graduation in Arabic from the University of Delhi. In 1976, under the guidance of his father, he started an Urdu monthly magazine called Al-Risala. In 1996, he established Goodword Books. His first book, entitled Tell Me About Hajj, was published in 1999.

Saniyasnain Khan is an Indian television host and children's author with over 100 children's books to his credit. A number of his books have been translated into French, German, Turkish, Danish, Dutch, Polish, Swedish, Bosnian, Norwegian, Russian, Uzbek, Arabic, Malay, Bengali and Urdu. 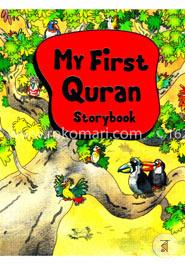 The Prophet Muhammad Stories for Children