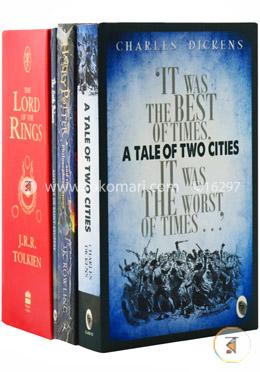 Up To 500 million copies sold

Summary of the Book
The best of times, the worst of times, the age of wisdom, the age of foolishness, the epoch of belief, the epoch of incredulity, the season of Light, the season of Darkness, the spring of hope, the winter of despair, having everything, yet nothing, leading to heaven, yet leading to the other way, the time of the French Revolution was all this and more. In this setting Dickens begins his most famous work, telling the story of the French peasantry demoralised by the French aristocracy in the years leading up to the revolution. Principally the story of Sidney Carton and Lucie Manette, this book follows them and the villainous Madame Defarge to tell a story of darkness, love, forgiveness, revenge and self-sacrifice.

About Charles Dickens
Charles Dickens was an English novelist, short story writer and social critic. He is best remembered for his prolific writing, and especially the novels: David Copperfield, A Christmas Carol and The Pickwick Papers.
Considered the literary juggernaut of his age, Dickens constantly portrayed the poor and orphaned in his novels and stories, and touched upon the poor living situations which were rampant in those days.

"The Lord of the Rings" Summary Of The Book
The Lord of The Rings epic centers around the Dark Lord Sauron and the One Ring that he forged himself. Sauron forged a special ring for himself, the One Ring. This ring had the power to rule all the other rings and thus enabled Sauron to control all the other people of Middle-Earth. However, he was defeated by an army of Elves and Men, and his ring is taken by Isildur. Isildur is killed and the ring is lost

Two thousand years later, the Ring surfaces again. It is discovered by a stoor-hobbit called Deagol, and he is killed by his friend Smeagol who covets the Ring. Smeagol is banished by his people to the Misty Mountains. His life is extended by the Ring, but he becomes a twisted creature called Gollum.

From Gollum, the Ring falls into the hands of a hobbit named Bilbo Baggins. At the beginning of the first book, Frodo Baggins, Bilbo’s nephew, inherits the ring. Neither Bilbo nor Frodo know the true nature of the Ring, but their friend Gandalf the Wizard suspects what it is. When it is confirmed that it is the One Ring, Gandalf advises Frodo to get rid of it, for it has a tendency to corrupt whoever possesses it.

Frodo, along with his friend Samwise Gamgee, and his cousins Merry and Pippin, set off to Mount Doom, a volcano where the Ring was forged. The One Ring can only be destroyed at the place where it was forged. Frodo volunteers to undertake the perilous journey to Mount Doom in Mordor. Frodo and his friends set off together on their quest, but on the way, circumstances lead to the Fellowship being broken.

Sam and Frodo are separated from the rest of the group. Pippin and Merry are kidnapped. Sam and Frodo continue on their trek to Mordor on their own. The others follow Merry and Pippin's kidnappers.

The Lord Of The Rings is one of the most influential works of literature ever written. It continues to inspire works in the fields of arts and entertainment, several decades after it was written, and has a cult following. The Lord Of The Rings Trilogy has been adapted for the movies.

About J. R. R. Tolkien
J. R. R. Tolkien was an English philologist, professor and writer.
The Hobbit, The Silmarillion, Unfinished Tales, The Children of Hurin, Tales from the Perilous Realm, Legend Of Sigurd and Gudrun, The Book of Lost Tales, and The Fall of Arthur are some of his other books.
J. R. R. Tolkien was a professor and philologist. He was in the faculty of Pembroke College and later at Merton College, Oxford. The meticulously crafted epic, The Lord of The Rings, has been a defining work in the High Fantasy genre, and led to a revival of this kind of literature. J. R. R. Tolkien is thus often referred to as the Father of Modern Fantasy literature. He was made a Commander of the Order of the British Empire in 1972.

The Little Prince first published in April 1943, is a novella, the most famous work of French aristocrat, writer, poet, and pioneering aviator Antoine de Saint-Exupéry.
The novella is one of the most-translated books in the world and has been voted the best book of the 20th century in France. Translated into 300 languages and dialects, selling nearly two million copies annually, and with year-to-date sales of over 140 million copies worldwide, it has become one of the best-selling books ever published.
After the outbreak of the Second World War, Saint-Exupéry escaped to North America. Despite personal upheavals and failing health, he produced almost half of the writings for which he would be remembered, including a tender tale of loneliness, friendship, love, and loss, in the form of a young prince visiting Earth. An earlier memoir by the author had recounted his aviation experiences in the Sahara Desert, and he is thought to have drawn on those same experiences in The Little Prince.
Since its first publication, the novella has been adapted to numerous art forms and media, including audio recordings, radio plays, live stage, film, television, ballet, and opera.

বইটি আপনি কেন পড়বেন?দেখে নিন বিশ্বের সেরা সাইট আমাজন.কম
এর কিছু তথ্য-
রিভিউ সংখ্যা – ১৮,৭৫৯
এভারেজ রেটিং – ৪.৭
কিশোর ক্লাসিক ক্যাটেগরির ২০০তম বেস্টসেলার বই
আমাজন.কম লিংক https://goo.gl/Fk3Jnz
Summary Of The Book
The Hobbit is a fantasy novel that begins with introducing the readers to Gandalf, who is successful in tricking Bilbo into having a party. This party is intended for Thorin, and his gang of dwarves. This merry group of beings then begins to sing of gaining victory over the famed Lonely Mountain, its treasure, which is currently in the control of a dragon named Smaug. As the music slowly starts to fade, we come to know of a mysterious map, possessed by Gandalf, which can help them gain access into the Lonely Mountain.
Gandalf then suggests that Bilbo be made to carry out this expedition, and after a while Bilbo is persuaded to do so. What follows is their encounter with trolls who seek to devour them. Gandalf is however, successful in saving the dwarves from doom. Bilbo then finds himself separated from the rest of the dwarves. As he fumbles around in that territory, he comes across a ring that seems rather mysterious, and this leads to the occurrence of various other events that keep the readers glued to the end.
This novel has been greatly appreciated by its readers, being labeled as the most important book of the 20th century by the Children’s Books Of The Century poll, published in Books For Keeps. Although the exact number is not known, there have been 35-100 million copies of The Hobbit sold, till date, since it’s publishing in the year 1937. The Hobbit has also been adapted into a movie, whose first part, The Hobbit: An Unexpected Journey released in the United States on the 14th of December 2012. This movie was directed by Peter Jackson, and the second, and third parts are scheduled to release in 2013, and 2014.
About J. R. R. Tolkien
J. R. R. Tolkien was a renowned poet, professor, author, and philologist.
Apart from this book, Tolkien had written a number of other books, and some of them include The Lord Of The Rings: The Fellowship Of The Ring , The Road Goes Ever On , The Lay Of Aotrou And Itroun, and The Adventures Of Tom Bombadi .
Tolkien was born on the 3rd of January, 1892, in Bloemfontein, Orange Free State. He completed his schooling from King Edward’s School, Birmingham, and finished his degree from Exeter College, Oxford, studying English Language, and Literature, graduating with a first-class honours. In the year 1920, Tolkien was taken on as a Reader at the University Of Leeds, being the youngest professor among the faculty. He also worked at Pembroke College, Oxford, holding the position of the Rawlinson And Bosworth Professor Of Anglo-Saxon. In the year 2008, he was listed among the “The 50 Greatest British Writers Since 1945”, by The Times. Tolkien passed away on the 2nd of September, 1973, in Bournemouth, England.

Ten people come to an island for various reasons. All of them have one thing in common: they have been involved in one way or the other in murders but they’ve escaped scot-free. After dinner, they’re all charged with their respective crimes by a gramophone recording. They can’t escape their would-be killer, who threatens to kill them in a manner similar to the old nursery rhyme, “ten little Indian boys.” Can they survive this nightmarish episode, or will they be doomed to die for their crimes?

About Agatha Christie
Agatha Mary Clarissa Christie was an English writer known for her murder mystery novels and short stories. She has also written romances under the name Mary Westmacott.

A prolific writer, Agatha Christie wrote 66 detective novels and 14 short story collections and is best remembered for characters such as Hercule Poirot, Miss Jane Marple, and Tommy and Tuppence Beresford. Some of her most famous works are: The Mysterious Affair At Styles, The Murder of Roger Ackroyd, Sparkling Cyanide and Curtain: Poirot's Last Case. Her play, The Mousetrap, holds the record as the longest initial run of any play in history, running at the West End of London since 1952. She was bestowed with the Order of the British Empire for her contributions towards English literature.