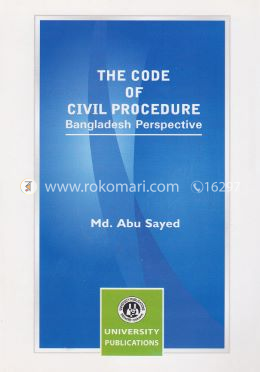 "The Code of Civil Procedure Bangladesh Perspective" Preface:
The Code of Civil Procedure, being a procedural law to enforce the rights of individuals and a wonderful Legislation is a reenactment made in 1908 which had been subjected to minor amendments at different times. The Code of Civil Procedure covers a vast field and the rules of procedure, etc. laid down in the Code govern almost all kinds of suits or proceedings that come up before court or tribunals having civil, revenue or other kindred jurisdictions. So wide is its significance that “Procedure” is a term which is hardly capable of exact definition. It embraces what is technically known as Pleading, Evidence and Practice. It denotes the selecting the jurisdiction which has cognizance of the matter in question, the method of conducting litigation and judicial proceedings so as to procure an appropriate decision of it, and setting in motion the machinery by which the judgment obtained can be rendered effectual. Justice in courts of law has to be administered according to a certain standard which is neither the notion of natural justice, nor what is known as sub-standard justice. That standard being the one which the Code of Civil Procedure is designed to achieve, the importance and necessity of very strict and meticulous adherence to the rules of procedure in the Code cannot be overstressed.
From the time of studying at the Dhaka University law department we felt the necessity of a book on CPC written in the lucid language which is easy enough to understand to explore the hidden treasure contained in the Code. From that passion I took the initiative to write the present book. After joining in the Judiciary, I had the opportunity of participating the legal training course at the Judicial Administration Training Institute and along with other learned trainers came in the touch of Justice Mohammad Hamidul Haque and learnt a lot from them regarding proper assessment, analysis and to find out proper answers to complicated judicial problems. Again, being involved in the judiciary continuously I am learning court management and how to ensure the proper justice to the litigants coming to seek justice at the Courts.