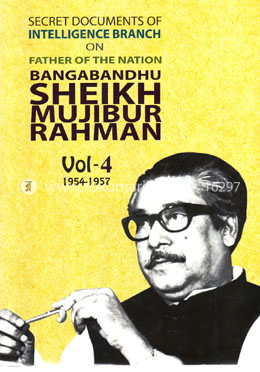 The intelligence agency of Pakistan kept Father of the Nation Bangabandhu Sheikh Mujibur Rahman, the greatest Bengali of all time, under strict surveillance almost at every stage of his 23 long years' activities starting from struggle for self-determination to autonomy and from autonomy to independence.
The then Intelligence Branch(IB) collected and compiled details of almost all his political programs and other activities nationwide. Documents found in 47 personal files(PF) preserved in his name will successively be published in volumes 1-14. These volumes will provide, many known and unknown facts about the emergence of the country named Bangladesh. All these unknown facts remained beyond the knowledge of our people in general because they were preserved as classified government documents.
Bangabandhu Sheikh Mujibur Rahman organized the East Pakistan Muslim Chhatra(students) League and engaged them in the Language Movement and the movements for realizing the rights of the menials of Dhaka University. Parting from Muslim League, Pakistan's influential and ruling political party, he organised Awami League and transformed it into a popular party of the distressed people of Bengal. It is in his hands that the complete expansion and full blossoming of Awami League took place.
Despite the Bengalis being the majority, the ruling coterie of Pakistan took recourse to various conspiracies to keep the Bengalis away from state power. Their ill motive to prevent the Bengalis from governance was ultimately exposed when they dismissed the 1954 United Front Government and imposed the Central Government rule. Bangabandhu made the people understand how Bengal's money eg currency earned from jute sales were being spent to transform Karachi, Lahore, Rawalpindi and Islamabad into modern cities.
For 23 long years he inspired the people of Bengal with the spirit of independence by making them realize the unbridled discriminatory behaviours of the Pakistan ruling class towards the Bengalis, including extreme disparities in military and other government employments, difference in prices of daily commodities in the two wings of Pakistan, unfair levy on goods in East Bengal, discriminatory education policy and negligence to East Bengal in its infrastructure, roads and highways development and so on. It is in continuation of this motivation process that there followed the vigorous anti Ayub Movement, the 6-Point Movement, Agartala Conspiracy Case, the Mass Uprising of 1969, the Election of 1970, the Non-cooperation Movement of 1971 and last of all, the War of Independence. Thus the Bengalis won their greatest achievement in a thousand years, their nation state - the People's Republic of Bangladesh.