Not All Springs End Winter (Hardcover) 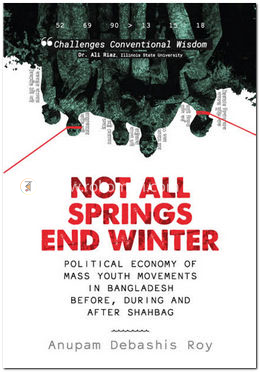 Not All Springs End Winter (Hardcover)

Political Economy of Mass Youth Movements in Bangladesh Before, During And After Shahbag

From the language movement of 1952 to the Road Safety Movement of 2018, the history of Bangladesh is deeply rooted in its history of mass youth movements. This book is dedicated to analyzing the specific methods that worked and did not work in those movements, from the theoretical framework of political economy. It will discuss movement strategies, grievance framings, mobilization tactics, organizational structures, usage of symbols, framing of demands and objectives, etc., both in the historical movements and in the contemporary movements. The book briefly discusses the Language Movement of 1952, Mass Uprising of 1969 and the Movement for Democracy in 1990. It, then, provides an extensive critical analysis of the 2013 Shahbag movement and the political events and the overall atmosphere of the democratic space ever since. It also provides an analysis of the new movements, i.e the “No VAT” movement of 2015, and the quota reform movement and the road safety movement of 2018. The book shows how the new movements have learned from the old movements and how they are increasingly improving in terms of methods and tactics. It also provides critiques of the methods used historically and the methods amended. It also provides a brief history of the past and the contemporary, and discusses, in some detail, the third force leadership that is brewing from the leaders and participants of the movements of the past decade that can lead to new politics in the Bangladeshi landscape in this decade. Buy the Kindle Version: https://www.amazon.com/Not-All-Spring... Praise for the book: “This book is a must-read for anyone who appreciates nuanced and fact-based analysis. Anupam is a gifted young political analyst who is poised to be a prominent Bangladeshi voice in the coming days. His book is theoretically informed, critically crafted and sheds significant insights into the political economy of the Bangladeshi youth movements by challenging simplistic dominant narratives,” —Dr. Mubashar Hasan, Research Fellow, University of Oslo, Norway and Assistant Professor, Political Science and Sociology, North South University. “A timely analysis of social movements in Bangladesh since 2010 identifying their achievements as well as their pitfalls and drawing lessons for the activists of the future. The author writes with passion from first-hand experiences of a participant which makes the book highly readable. He draws our attention to the need and importance of social movements in giving birth to a new kind of politics meeting the aspirations of the youth.” — Dr. Rounaq Jahan Distinguished Fellow, Center for Policy Dialogue Visiting Scholar, Columbia University Ex-Professor of Political Science, Dhaka University “There is a compelling reason to read his analysis. His argument to locate these movements within the broader political scene and explore its larger implications for the future of Bangladeshi politics deserves our attention.” –Dr. Ali Riaz Distinguished Professor

Anupam Debashis Roy is a Bangladeshi author, columnist, and activist. He is an editor and organizer of Muktiforum, a platform for anti-authoritarian writers, artists, and political activists dedicated to building a liberal, pluralist and pro-people society.
He is currently a Ph.D. student of Political Science at Boston University and an incoming JD candidate at Harvard University. In 2019, he graduated magna cum laude from Howard University with a Bachelor of Arts with honors in Interdisciplinary Studies, an amalgamated social science major with courses in Political Science, Philosophy, History, and Economics.
Anupam’s research has been published in peer-reviewed journals and he also writes regularly on political, social and economic issues on national and international outlets. He has authored a number of books, both in fiction and nonfiction.
Anupam was born on May 14, 1997, in Syedpur, Bangladesh. He grew up in Chattogram and went to Collegiate School there and passed higher secondary school from Rajuk Uttara Model College in Dhaka. His parents are from Bagerhat and Khulna, Bangladesh.