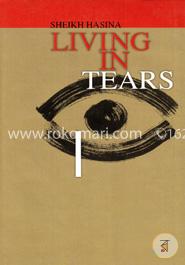 ‘Living in Tears’ Book flap:
Sheikh Hasina is acknowledged as an idealist and farsighted leader in Bangladesh politics. The unprecedented development and success that she achieved as Prime Minister of Bangladesh for the period 1996-2001 has made Bangladesh a country of immense potentialities and brightened her image in the world outside. A thorughbred political personality Sheikh Hasina is forever dedicated to the service her people. This consciousness keeps her aflame in the love and trust of the service of the people. Democracy and development are her two overarching commitment in politics. Just as she had transformed the people of Bangladesh into a self-reliant nation with her courageous leadership between 1981 through 2002, likewise in developing the economy of Bangladesh in the second half of 1990s she achieved astonishing success. Talent, industry and creativity are amongst the strong traits of the boldness of her character.
As a writer also the lively presence of Sheikh Hasina has been a major attraction to her readers. With her sharp pen she has depicted her ideas about the people and the society. She never forgets her readers even in the busiest hours of her political life. These articles were written by her in the wake of rude shocks with the conspiracy and malpractices surrounding the national elections in October 2001. She has boldly portrayed the terrorist barbarism of Jamaat-BNP alliance and how it rendered the life of helpless victims totally unbearable. Against the backdrop of distressed democracy and insulted humanity, whither Bangladesh is the major question she is posing to us.
The daughter of the father of the nation Sheikh Mujibur Rahman, Sheikh Hasina was born on the 28th of September, 1947, in the remote village of Tungipara in Gopalganj district. In 1973, she obtained her B.A. degree from Dhaka University. She was elected the President of the largest political party, the Awami League in 1981. Awami League formed the government on June 23, 1996. Sheikh Hasina took the Oath of her office as Prime Minister of Bangladesh created by her father 25 years ago.
Sheikh Hasina is an avid reader of books on international politics, literature And She is fond of scanning both national And international periodicals. She is also a prolific auther on subjects affecting her people and country. Amongst her published Works are the following: Ora Tokai Keno? (Why are they street children?), Bangaldeshey shairatantrerjanma (the birth of autocracy in Bangladesh), Daridra
Doorikaran (Poverty Alleviation) Democracy in Distress Demeaned Humanity, Brihattar Janagoshthir Janya Unnayan (Development for the masses), People and Democracy.
Boston University conferred the honorary doctorate degree in law on Sheikh Hasina on the 6th of February, 1997. Waseda University of Japan awarded the same degree to her on the 4th of July, 1997. Aberdeen Dundee University of the UK gave her an honorary doctorate degree in philosophy on October 25, 1997. She was awarded the prestigious doctorate degree (Deshikottom) (the best in land), in literature, by the Viswa Bharati University (Shantiniketan) of India on January 28, 1999. For her creative contributions in Social service, the Australian National University awarded her the doctorate of law degree honoris causa in October 1999. In the same year she was awarded the honorary doctorate degree in law by her Alma mater, Dhaka University, for her role in peace making and democracy. The world renowned Catholic University of Brussels, Belgium, conferred the honorary doctorate of law degree on Sheikh Hasina on February 4, 2000, in recognition of her role in the establishment of democracy, preservation of human rights and promotion of peace and harmony. The same year, on September 5, Bridgeport University of Connecticut, USA, awarded her the degree of doctor of human letters. She bagged the most prestigious Huphey-Boigny UNESCO award on September 24, 1999, for her political courage and statesmanlike leadership in resolving the 25-year old conflicts in the Chittagong Hill Tracts (of Bangladesh).

Preface:
The Centre for Research and Information (CRI) was closed down soon after the launch of the Operation Clean Heart in October 2002. We went to court against this high-handed and illegal action and the High Court Division issued a rule on the Government. The procrastination that our judicial system suffers from has left the case unresolved although more than a year ago the Operation was ended. Per force we had to cease functioning and it is about sixteen months that our office is under illegal police occupation. Prime Minister Khaleda Zia has immensely succeeded in locking up the centre and making us in a sense idle.
One of the objectives of CRI is research and publication on national issues-problems, policies and solutions. Confronted with the fascist tactics of the BNP-Jamat Government we have not been able to do much.
Meanwhile in addition to our usual problems of governance and development we have a new menace to tackle. That menace is the resurgence of fundamentalist regressive politics. Ethnic cleansing, suppression of dissent, mixing of religion and state affairs, destruction of established institutions and warlordism are some of the major manifestations of this menace. Except for the period of occupation of the country by Pakistani marauders in 1971 the situation has never been so suffocating and so unstable as it is today under the misrule of BNP-Jamat Alliance. Unfortunately it is not just their politics of vengeance, patronage of violence and lawlessness and fanatical religious orientation that have destabilized the society. But it is more their anti-people proclivities, intellectual backwardness and utter administrative incompetence that have heightened the sorry plight of the nation.
Our chief patron Sheikh Hasina, President of Awami League and Leader of the Opposition, wrote an article entitled "Insufferable is the Defilement of Humanity" few days before Begum Khaleda Zia called in the military to restore law and order in the country. In fact, the article was written on 8th October 2002 and the Operation Clean Heart commenced on 16th October. She presents in contrast to the promising situation prevailing earlier, the injustice perpetrated in Bangladesh after the election of 2001 and asks why did this happen? The pathos of the gruesome incidents mentioned in this article is, indeed, depressing and shakes the very faith in man's humanity.
Soon after the promulgation of the Indemnity Law in January 2003 she wrote another piece on this uncivilized and unconstitutional law. The illegality of an action is heightened when you try to justify it with lame arguments. It is made outright obnoxious when you try to cover it up with further illegal action. As Honourable Sheikh Hasina MP points it out Operation Clean Heart itself did not have the sanction of law. The Government never came out clean on the subject, nor did it permit any discussion in the Parliament about it. On top of it came the injustice of the Indemnity Law.
The Indemnity Law is one of the worst kinds of arbitrary law and it is more so when it has retrospective effect. The Law promulgated by the BNP-Jamat Government in January 2003 is a shame for the nation. It also happens to be simply unconstitutional. The author has further pointed out that it is irreligious and goes against the Principles of Islam.
These two essays along with seven annexes containing diverse reports and information was published in a Bengali book entitled "Shohe Na Manobotar Obomanana" (Can't tolerate the insult to humanity) during the book fair of 2003. In introducing the book author Sheikh Hasina mentioned that she wrote it as she could not stand the blatant violations of human rights and crimes against humanity.
The CRI thought that these two articles deserve wider circulation. About eight months ago thus we initiated the process of publishing this book in English.
Awami League parliamentarians attended the budget session in June 2003 but they could not stay inside the parliament for long as they found that they could not express their views and would invariably be prevented from making any statement on some pretext or other. And the members of the Treasury bench in the parliament hurled abuses and invectives against them relentlessly. The session ended without the Opposition in the house and falsehoods, half-truths, insinuations and abuses featured prominently in the concluding statements. The Leader of the Opposition furnished a reply and explained the situation in a published article entitled "The BNP-Jamat Politics of Vendetta". She concluded by pleading with the ruling junta to behave and attend to improving governance. Here also human rights is the central issue-the moot question is how can we rise above barbaric behavior?
On 17 October Sheikh Hasina published in most Bengali newspapers an article entitled "Living in Tears". This was inspired by the fiasco in the Commonwealth Parliamentary Conference held in Dhaka in October 2003. Misrule was already the hallmark of the BNP-Jamat Government. As if ruthless suppression of dissent, muting the Opposition with application of brute force and illegal money making at all levels and in all public business were not enough; the nation was disgraced by the incompetence of the authorities in simply playing the national anthem.
We started with two articles and have ended up now with four. These are all related to human rights and incompetent governance by a junta whose political ideals are vendetta, fundamentalism and conspiracy. In Bangladesh this is a period of nightmare, an elected government with three-fifth majority is applying the law of the jungle in the country. A stolen election can, indeed, be much worse than direct martial law, whose worst legacies, however, are destruction of the integrity of the electoral process and trampling of the social

Table of contents
Insufferable is the Defilement of Humanity - 13
Living in Tears - 44
The BNP-Jamat Politics of Wendetta - 55
Operation Clean Heart: The Indemnity Ordinance - 70
Annex I: Suppression of Journalists in Bangladesh 2002 And 2003 - 85
Annex III : 58 Persons killed during Operation Clean Heart - 88