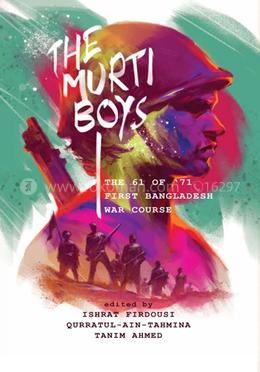 The 61 of '71 First Bangladesh War Course

It was 1971. A vicious war had broken out in Bangladesh. Thousands joined the fight to free their motherland. But the war also needed officers to lead the thousands in battle. Bright young men, boys rather, were selected for a quick training to become officers at a remote pocket of West Bengal called Murti. Second lieutenants of the first war course would be the first batch of officers to be inducted into the Bangladesh army.Their odds were stacked. They would go down as seditious rebels or gallant saviours. They took the gamble. Some goaded death and fell in battle without a flicker of fright. Some led men to certain doom and returned victorious. Some stabbed the enemy in close combat. Some got away by the skin of their teeth. Each had a story to tell.Daredevils, warriors and lionhearts, this is the story of the Murti Boys.Contents Part 1 Preamble Part 2 The First Bangladesh War Course Part 3 Their warSector 1 Tumulutuous Chattogram Kabuli Building Incident First Blood The CasualtySector 2 The Final Offensive Initiation by Fire My Days as a Freedom Fighter My life and 1971Sector 3 From Student to Soldier Ki? Parbee? A Glance at the War-memories of One of the First 61 of 1971Sector 4 Freedom Fighter My Seventy-One Kill Zone The Battle of Dhamai Gotargram Operation Freedom Fighter Bir Protik Zahir Giasuddin’s WarSector 5 People’s War With Sector Five ‘SAM’ Khaled’s War Fire with Fire Freedom Fighter Fazle HossainSector 6 Resistance The Gift of War, the War of LiberationSector 7 The Hamzapur Tigers From Mujibnagar to Hamzapur Tiger is Dead!Sector 8 Bait Ambush Treachery and PaybackSector 9 Enemy on the Run My War MotherlandSector 11 Rice Cakes of Burerchar Sheikh Kamal by Those Who Knew Him List of Names of 61 Cadets of the First War Course Gallantry awards

Trials of 1971 Bangladesh Genocide: Through a Legal Lens