The Creed of Islam Or The Revolutionary Character Of Kalima (Hardcover) 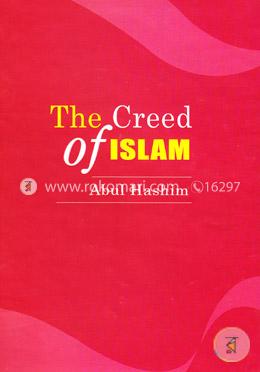 The Creed of Islam Or The Revolutionary Character Of Kalima (Hardcover)

Foreword
The author of the `The Creed of Islam' Janab Abul Hashim, is my closest associate in thought and action. I have read the book word by word and line by line and have weighed each word with great care and attention. It is my considered opinion that in the horizon of creative genius the book is a new star which appears at intervals of centuries and creates a revolution in the world of wisdom and original thinking. The beauty of the book lies in the philosophy which, my own writings apart, is still a sealed bottle of wine to the intellectuals of the world. This philosophy is the philosophy of `Rubbaniyat' which is a rare fruit of intellectual pursuit and is the very essence and spirit of the teachings of Al-Quran.

The Philosophy of `Rubbaniyat' Runs throughout the book from cover to cover although there is a direct mention of it only in one place viz, the article on the conception of religion. Each thesis is woven whith the delicate fabrics of the philosophy of `Rubbaniyat' with such masterly skill and workmanship as would make it difficult even for seasoned intellectuals to discover it if I had not disclosed the secret. The author is a powerful exponent of `Rubbaniyat' but he has, it is clear to me, deliberately pushed back his philosophy to the background apprehending that his invitation to action would be lost in the subtleties of philosophy if the philosophy appeared on the surface.

Philosophy or `Rubbaniyat' is a revolutionary philosophy. Its revolutionary urge is so potential that by a single drive it radically alters the very basis of traditional philosophical thinking and the science of Religion. It is so grand and sublime that the highest idealism of the ancient world and the modern philosophy of materialism dare not compare with it. Standing firmly on the solid rock-bed of the philosophy of `Rubbaniyat', as it does, `The Creed of Islam' shines like a bright star in the clear and spotless blue of objective thinking, unstained by superstition or prejudice. the task of showing in concrete terms how to mould the minute details of everyday business of life of modern civilised society in the light of `Rubbaniyat' is not the job of ordinary mortals.

The author of `The creed of Islam' has performed this miracle with marvelous skill and he has not faltered even in those places where more often than not experts go astray. The suggestion that `Rubbiyat' and not `Rubbaniyat' is the fountain of all divine attributes, is a proof clear and conclusive that the author of `The Creef of Islam' knows the secrets of the philosophy of `Rubbaniyat'; and his faith and conviction that for the attainment of perfection, mans being and becoming must necessarily revolve round `Rubbaniyat' show, that he can with case and comfort dive into the fathomless depths of the philosophy of `Rubbaniyat'.