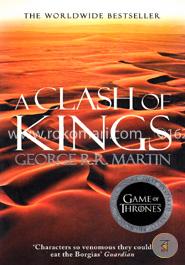 "A Clash of Kings" Short summary of the Book:
It is cold in the North. Lord Stark is dead and Joffrey sits on the Iron Throne. The seven kingdoms rise up in arms as contenders vie for the throne. The Starks are separated, and Robb Stark begins his campaign against the Lannisters for their treachery. However, as all the Starks know, winter is coming, and it will only get colder. In the East, Daenarys Targaryen is amassing her armies. Considered the Mother of Dragons by her followers, she slowly begins to rise to the title of Khaleesi and becomes a formidable foe. No one is safe in Westeros, for there is a saying: Valar Morghulis. All men must die. And die they will in the bloodbath that is to follow in the coming days. Who will win the Iron Throne? More importantly, who will live, and who will die?