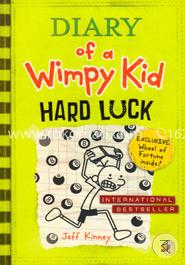 'Diary of a Wimpy Kid : Hard Luck' Summary of the book
The book starts with Greg writing about how his mother is always saying that "friends will come and go but family is forever." Greg doesn't believe that, since his friend, Rowley, now has a girlfriend named Abigail, continuing from the events of the last book. Ever since then, Rowley has been acting different, such as refusing to hang out with Greg and agreeing with everything Abigail says. Greg has been getting bored without Rowley, so his mother tells him to "branch out" and make friends with the kids in the neighborhood. He decides to become friends with Fregley, since he could "mold him into EXACTLY the type of friend [he] need[s]." Greg tries to get Fregley to do funny things during lunch, and Fregley then becomes popular after the other kids find out that he can "chew" food with his belly button. Greg's mother announces that her extended family will come to town for Easter. Greg then writes about some of his family members, including Meemaw, who organized egg hunts in the backyard. On Easter, the family notices through a photo album that Meemaw has hidden her diamond ring in an egg, and everyone rushes out to find it, although the search is unsuccessful. Greg decides to join an after-school activity, and with the help of a Magic 8-Ball he found on Easter, he becomes a member of the Yearbook Club. The next day, Greg accidentally drops his Magic 8-Ball, and it breaks. Greg is called to the yearbook office to take yearbook photos of Fregley (Most Popular) and Rowley and Abigail (Cutest Couple). He then resigns from his position. Greg throws his broken Magic 8-Ball into his grandmother's yard. At school, he learns that Rowley and Abigail have broken up. Greg wonders if he and Rowley should be friends again. He goes back to the Magic 8-Ball, hoping to get "one last good answer," and finds the plastic egg with Meemaw's ring. To avoid breaking up his family, he hides the egg in his mother's closet. Greg concludes that he has to make big decisions on his own, and reconciles with Rowley. He writes, "I know Mom's always saying that friends come and go and family is forever, and maybe that's true. [...] I'm sure me and Rowley will get in another fight somewhere down the road and then we'll go through this drama all over again. But for now, we're good."

Jeffrey Patrick "Jeff" Kinney (born February 19, 1971) is an American Boy game designer, cartoonist, producer, actor, movie director and author of children's books including the Diary of a Wimpy Kid book series. He is also attributed as the creator of the child-oriented website Poptropica. He also appeared in the Diary of a Wimpy Kid films as Holly Hills's father. Kinney was born and brought up in Fort Washington, Maryland, United States. He has an older brother, sister and a younger brother. He attended the University of Maryland at College Park in the early 1990s. It was in college that Kinney created a popular comic strip, Igdoof, which ran in the campus newspaper, The Diamondback.