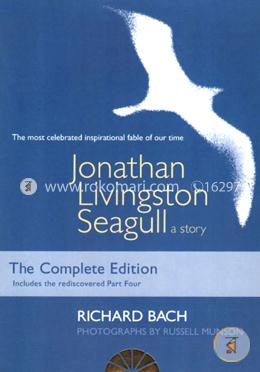 'Jonathan Livingston Seagull' Summary of the book
Jonathan Livingstone Seagull could never fit in with the other seagulls. His primary goal wasn’t to fly every day in search of fishermen leftovers. He was a rebellious seagull not interested in rules. He wanted to reach the biggest speed and fly as fast as possible. He pushed his limits every day but practicing complicated twists and turns. He separated himself from the flock and became a loner.
His parents begged him to join the flock again and try to live with the other seagulls. He wanted to please them but he did not feel happy with that kind of life. He was not interested in the flock and hanging out with the seagulls. Whatever he did, he always came back to himself.
He was never satisfied with himself and always wanted to improve his flying so he practiced every day. Soon he broke the world record and flew 165 km/h. Then he collapsed and fell into the sea.
While he was floating sadly he heard a voice inside that told him he had limits in life and that he has to accept them. He decided to go back to the flock then. It was nighttime and he heard the voice again saying that seagulls can’t fly at night because they do not have short wings or sharp eyesight as the eagles. He did not pay attention to the voice and just kept on flying.
Suddenly something dawned on him. He thought that he should bend his wings a little bit and fly with the tips of his wings. Not thinking about the danger he went 600 meters up and reached the speed of 260 km/h. He forgot about his promises to be a normal seagull and decided to keep on practicing every day. Soon he reached the speed of 396 km/h. Not a single seagull in history could fly that fast.
He was proud of himself and his success so he couldn’t wait to share it with the other seagulls. But he was surprised when nobody was happy for him. Not only that but also the elderly called him out for disgracing his flock. He expelled him from the flock and ordered him to live on the rocks that were far away. Even though he tried to explain them the new meaning of life, nobody listened to him.
He lived a lonely life far away from everyone but he felt good. His life made sense and he was able to feed himself and take care of himself. He lived a long life.
One night he saw two seagulls. He saw that they were flying fast. They took them from the earth to the sky. He practiced flying with the seagulls that shared his opinion but he noticed that there were a few of them. His instructor Sullivan told his that the reason for that was that this was only one part of life and that every seagull changes depending on what they learn and Jonathan learned everything.
The Elderly thought him how to fly properly and soon he could fly even faster. With the power of thoughts, Jonathan went back to Earth. He was thinking about his previous flock and wanted to teach them everything he had learned and wanted to show them how to be free. Jonathan went back to the rocks and there he met Fletcher Lynd. He was another seagull that was kicked out of the flock for the same reason Jonathan was. More seagulls joined them and they were practicing their flying together.
After months of hard work, they decided to show everyone what they know. Even though everyone turned their back on them soon seagulls started gathering around them. More and more seagulls wanted to learn how to fly.
Fletcher became the main instructor and Jonathan went to teach another flock. Fletcher remained in the hope of seeing Jonathan again. (bookreports.info)