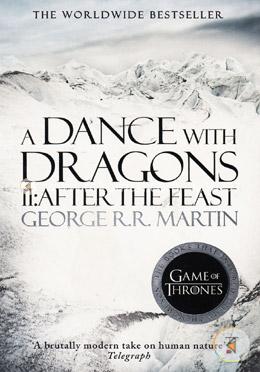 "A Dance with Dragons" Summary of the Book:
The Wall has been occupied by King Stannis Baratheon while Samwell Tarly has been sent to the citadel to become a Maester and is accompanied by Gilly. They have also taken the child of Mance Raydor (exchanged by Jon Snow) with them.
After a number of warnings to the disobedient Slynt, Jon Snow beheads him for his dismissal of the authority of Snow. Meanwhile, Stannis has executed Mance while a truce is settled by Jon with Tormund, the new leader of the wildlings.
Ramsay Bolton has threatened Jon Snow in a letter, claiming to have triumphed over Baratheon’s army. He gives Jon Snow a choice, either he must give Bolton Stannis’s wife and daughter or perish at the sword. While Jon Snow is determined to kill Bolton himself, he is betrayed and stabbed by his own men.
Meanwhile, in the Free Cities, Tyrion is sneaked into Pentos by Varys after he murders his father. He is then sent to the south to help Daenerys Targaryen. It is then revealed that the son of Prince Rhaegar, Aegon Targaryen has been hidden by Varys and Illyrio in the hopes of eventually being installed as the king of Westeros. Jorah Mormont soon kidnaps Tyrion to seek forgiveness of Daenerys by delivering her Tyrion.
In Braavos, Arya has become the acolyte to the “Faceless Men” and temporarily been blinded. However, she soon regains her sight and successfully becomes their apprentice.
At Slaver’s Bay, Danaerys struggles to establish peace after having conquered Meereen. The land is then afficted by a dangerous plague. Even though she is in a relationship with Daario, she marries a noble to secure a more peaceful land by appeasing the Meereenese resistance group. She soon comes across the khalasar of Khal Drogo who had betrayed her. Meanwhile, Theon’s father sets sail to Meereen in hopes of using Danaerys to overthrow his brother.
In the North, Roose Bolton has been established as the warden of the north and Ramsay Bolton has married “Arya Stark” (actually Jeyne Poole) and abused her relentlessly.