A Storm of Swords (1 Steel and Snow) (Paperback) 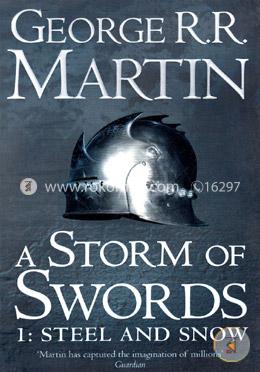 A Storm of Swords (1 Steel and Snow) (Paperback)

A Storm Of Swords: Steel And Snow Book 3 (Part 1) is the third book of the epic fantasy saga A Song Of Fire And Ice, written by George R. R. Martin, and first published in 2000. Set in medieval Europe, it tells a tale of war, intrigue, love, and betrayal. The book has ten different threads, with each thread following the trials and tribulations of a different family. Some of the narrators are Jon Snow, Ser Jaime Lannister, Tyrion Lannister, Lady Catelyn Stark, Ser Davos Seaworth, Samwell Tarly, Prince Bran Stark, Princess Sansa Stark, Queen Daenerys Targaryen, and Princess Arya Stark. It carries forward the story from the previous book, the prequel, A Clash of Kings, and is set during the time of the war of the Five Kings.

About the Author
George R. R. Martin, popularly called GRRM, was born on September 20, 1948, in New Jersey. He won the Alley Award for his book Powerman vs. The Blue Barrier in 1965, and became a household name when his fantasy saga, A Song of Ice and Fire, was made into a popular series titled Game of Thrones by HBO. This book was nominated for the prestigious Hugo Award. George Martin was also selected by Time Magazine as one of the 100 most influential people in the year 2011.