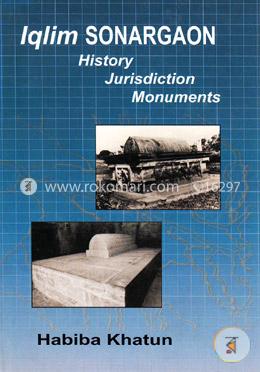 "Iqlim Sonargaon; History, Jurisdiction and Monuments" by Dr. Habiba Khatun, Professor, Department of Islamic History and Culture, University of Dhaka mentions Sonargaon an independent state of 1338 AD. It was a vast tract of land. The city and river port developed on the bank of the great river Brahmaputra. Sultan Ilyas Shah conquered Sonargaon in 1342. He made Sonargaon an iqlim (province) of his state Bangalah or Bengal. Bangalah had three units or iqlims viz. Sonargaon, Satgaon and Lakhnawti. Giasuddin Azam Shah was appointed as provincial ruler of Sonargaon by his father Sultan Sikander Shah. The Sultan built the Adina mosque in 1375. The Sultan's son built a stone tomb at Sonargaon and decorated it with art motif used in the Adina mosque. Sultan Sikander Shah died at a place near Sonargaon in a battle between the father and the son. Giasuddin became ruler of Bangalah and ruled from Pandua. He was killed in 1409 by Raja Gonesh. His chief wazir and general Khan al Azam Khan Jahan fortified the then south west border of iqlim Sonargaon with a ribat. He was again Ulugh Khan Jahan of Sultan Nasiruddin Mahmud Shah. Khan Jahan built many mosques and a stone tomb in the south west border of the city of Khalifatabad (modern Bagerhat) where he is identified in an epigraphic record. He died in 1459. His mosques bear the testimony of art motif of Sonargaon stone tomb and that of Pandua of the same period. Sonargaon city was extended towards north up to Katrabo, the fortified palace of Isa Khan of Sonargaon. Isa Khan masanadali was the King of Kings of Bhati. Katrabo is identified in a village of Rupganj upzila in Narayanganj district.