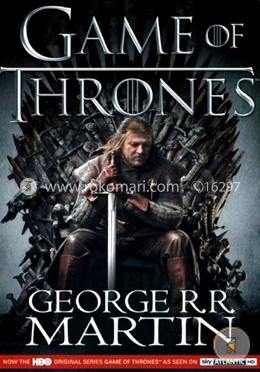 Summary Of The Book
Full of adventure, mystery, intrigue, and romance, Game Of Thrones: A Song Of Ice And Fire (Book- 1) TV Tie-in Edition is a fitting opening to one of the most popular fantasy fiction series. The book contains supernatural elements which revolve around the seasons which last decades. The summer is ending and winter is fast approaching. As the cold is on its way back, it is bringing along with it deadly forces. Beyond the protective walls of the kingdom, in the frozen wastes, supernatural forces are making their way to the world of men.

In this battle for the throne, replete with death, plunder, tragedy, betrayal, terror, and treachery, two families take centre stage, the Starks and the Lannisters. Lord Eddard Stark, the newly appointed ‘Hand’ of King Robert, has to defend the Iron throne. What happens to King Robert? What does Ned Stark discover that makes him the enemy of the Queen? Will Sansa Stark marry Joffrey? Who is Daenerys Targaryen and how will her actions affect Westeros? This fantasy adventure tale, which takes place in a land of magic, dragons, and supernatural creatures, keeps readers spellbound till the very end.

Published in 1996, Game Of Thrones: A Song Of Ice And Fire (Book- 1) TV Tie-in Edition became a New York Times bestseller. The novel received the Locus Award, the Hugo Award, and the Ignotus Award. It was also nominated for the World Fantasy Award and the Nebula Award. The series was adapted into an HBO television series, which premiered in 2011.

About George R. R. Martin
Born in Bayonne, New Jersey, in 1948, George Martin had started writing as a young boy. His other books include Dying Of the Light, Dreamsongs, The Armageddon Rag, Songs of Stars and Shadows, Fevre Dream, Warriors (1, 2, and 3), Portraits Of His Children, Quartet, A Clash Of Kings, A Storm Of Swords, A Feast For Crows, A Dance with Dragons, and A Dream of Spring.

Martin did his BS and then his MS in journalism from Northwestern University, Illinois. After the failure of his novel, The Armageddon Rag, Martin embarked on a television career. In 1971, at the age of 21, Martin sold his first story, The Hero, to Galaxy magazine. For 10 years, he worked as a television and movie writer and producer. In the mid 90s, he returned to writing books. Martin has won several awards for his novels and stories, including the 2012 World Fantasy Award for Lifetime Achievement. He was also named as one of the hundred most influential people by Time magazine. Martin lives in Santa Fe, New Mexico, with his longtime partner, Parris McBride, whom he married in 2011.