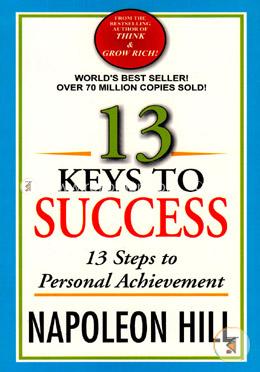 "13 Keys To Success 13 Steps To Personal Achievement" Introduction of The Book:
You can achieve success in anything you do, and this book will show you how to do it. Napoleon Hill's Keys to Success is the most practical and revealing examination of the Seventeen Principles of Success that Napoleon Hill ever wrote. These seventeen principles are the essence of the action and attitudes of everyone who has ever had a lasting accomplishment. If you make them your actions and attitudes, you will realize every one of your worthwhile goals.
'13 Keys To Success 13 Steps To Personal Achievement' Book Contents :
* Introduction
* Develop Definiteness of Purpose
* Establish a Mastermind Alliance
* Assemble an Attractive Personality
* Use Applied Faith
* Create Personal Initiative
* Build a Positive Mental Attitude
* Control Your Enthusiasm
* Enforce Self-discipline
* Think Accurately
* Control Your Attention
* Inspire Teamwork
* Learn from Adversity and Defeat
* Budget Your Time and Money

The Work of a Lifetime
Andrew Carnegie, the founder of a steel corporation that later helped form U.S. Steel and a great philanthropist, charged the young Napoleon Hill with what was to be his life's work: the assembling and analyzing of the qualities that had allowed the great figures of the early United States to achieve their lasting success. Armed only with introductions from Carnegie and a fierce determination, Hill set out to interview more than five hundred of these titans and distill their philosophies into a logical framework.
From men such as Henry Ford, Thomas Edison, Woodrow Wilson, and later Franklin Roosevelt, Hill gained invaluable insights. He also learned about the limitations each faced: He found Ford personally insufferable; he encountered and understood Edison's struggles with near deafness; and though he worked hard for FDR during the Great Depression to combat the national malaise, he disagreed strongly with many of the President's programs. Hill believed they placed too little emphasis on individual effort and lured Americans into relying on others, instead of on themselves. But by observing, working, and talking with these people, Hill learned priceless lessons that were much greater than the sum of his subjects' accomplishments.
Though Hill had already published a number of books which revealed his findings in broad detail and enjoyed commercial success, his crowning achievement was the publication of the all-time best-selling business inspirational book Think and Grow Rich in 1937.
This clear, concise elucidation of the way to success was an immediate sensation. It lays out the techniques of personal achievement in everyday language, full of examples and exhortations. More than fifty years later, supported by the work of the Napoleon Hill Foundation, Napoleon Hill's masterwork still finds thousands of new admirers every year, people whose lives are infinitely changed for the better.
Hill continued to refine his philosophy, sharpening his focus as his wisdom grew and as he met even more people whose lives had been built on the ideas he had outlined. The major outlet for his new knowledge was a veritable whirl-wind of speeches, lectures, and articles he prepared over the next thirty years. He spent his life spreading the gospel of success as directly and as personally as he could.
Unfortunately so much of the additional intelligence that Napoleon Hill developed was not published in book form. While he persisted in speaking all through his vigorous retirement, the hundreds of thousands of people who discovered. Think and Group Rich after Hill's death in 1970 have not had the advantage of his guidance on the many more practical points he pursued after the book was written.
With this in mind, the trustees of the Napoleon Hill Foundation directed that the key elements of Hill's later inspiration be set forth in this book.