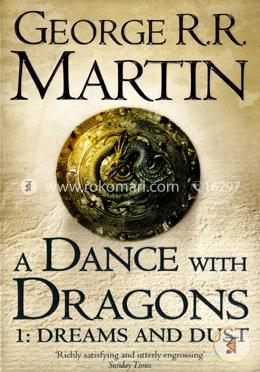 "A Dance With Dragons: Part 1 Dreams and Dust" Summary Of The Book
The primary backdrop of A Song of Ice and Fire is set thousands of years ago in the continents of Essos and Westeros. There are three major storylines, an epic war is waging between several families for the land of Westeros, the progression of Daenerys Targaryen, the true heir of Westeros, and her fearsome dragons, and the imminent threat of the walking undead.

In A Dance With Dragons: Dreams And Dust (Part - 1), the story progresses in the aftermath of the enormous battle. Jon Snow has been appointed Commander of the Night’s Watch and is occupied with warding off enemies who are out to kill him on either side of the Wall. He is backed by King Stannis Baratheon, who has set up base there. After murdering his father, Tyrion Lannister leaves the capital city and travels undercover to Pentos. Meanwhile, young Arya Stark trains under the Faceless Men in Braavos to be a merciless assassin. Daenerys Targaryen conquers the city of Meereen in the far East. She acquiesces to keep her dragons in cages since they began to actively kill livestock and people, and struggles to control the city amidst plague and military threats. Cersei Lannister admits to several of the charges held against her by the Faith of the Seven and is released from imprisonment, but is still on trial.

About George R. R. Martin
George Raymond Richard Martin, born in 1948, is an American author, television producer and screenwriter.
His other works are A Storm of Swords, Fevre Dream, A Feast for Crows, GRRM: A RRetrospective, A Song for Lya, and Songs the Dead Men Sing.
Born in New Jersey, he proved to have a flair for monster stories and epic fantasies even as a child. He procured a Bachelor’s degree in Journalism in 1970, and a Master’s in the same in 1971 from Northwestern University, in Illinois. Martin began writing short stories in science fiction for magazines in 1970, and published his first collection of short stories in 1976. He is married to Parris McBride and the couple reside in Santa Fe, New Mexico.