The remain of the day (Paperback) 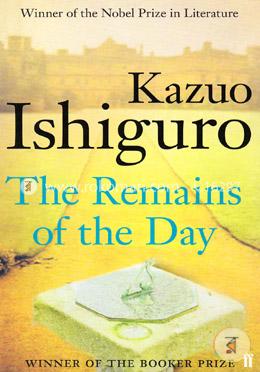 The remain of the day (Paperback)

Summary of the Book
Stevens is an English butler who has spent most of his life serving Lord Darlington. Now working for a new employer, the distinguished Mr. Farraday, Stevens receives a letter from a former colleague, the housekeeper Miss Kenton. In the letter, she describes her married life, which Stevens interprets as an unhappy one. To Stevens, the letter arrives with a chance to revisit both a lost relationship and the possibility of re-employment. Mr. Farraday believes Stevens wants to go on a motoring trip and lends him his car for a well-deserved break. Along the ride, Stevens reminisces about his past relationship with Miss Kenton. Along the course of the novel, it becomes apparent that they once had feelings for one another, but they had never admitted this to one another. Can Stevens return to Lord Darlington’s service and find the closure he desperately seeks?

About Kazuo Ishiguro
Kazuo Ishiguro is a British novelist born in Japan. Among his other works are A Pale View of Hills, An Artist of the Floating World, The Unconsoled, When We Were Orphans and Never Let Me Go.
The current title was adapted into a film starring Anthony Hopkins and Emma Thompson with James Fox, Christopher Reeve, Hugh Grant and Ben Chaplin. It received eight Academy Award nominations and is a critically acclaimed movie.

Sir Kazuo Ishiguro OBE FRSA FRSL (born 8 November 1954) is a British novelist, screenwriter, and short-story writer. He was born in Nagasaki, Japan, but his family moved to the UK in 1960 when he was five. Ishiguro graduated from the University of Kent with a bachelor's degree in English and Philosophy in 1978 and gained his master's from the University of East Anglia's creative writing course in 1980. Ishiguro is considered one of the most celebrated contemporary fiction authors in the English-speaking world, having received four Man Booker Prize nominations, and having won the award in 1989 for his novel The Remains of the Day. Ishiguro's 2005 novel, Never Let Me Go, was named by Time as the best novel of the year, and was included in the magazine's list of the 100 best English-language novels published between 1923 and 2005. Growing up in a Japanese family in the UK was crucial to his writing, as it enabled him, he says, to see things from a different perspective to that of many of his English peers. In 2017, the Swedish Academy awarded Ishiguro the Nobel Prize in Literature, describing him in its citation as a writer "who, in novels of great emotional force, has uncovered the abyss beneath our illusory sense of connection with the world". Ishiguro was knighted in the 2018 Queen's Birthday Honours List.

One Night @ the Call Center

2 States : The Story of My Marriage

The fault in our stars

To kill a Mocking Bird

The Forty Rules of Love

Norwegian Wood(Translated From the Japanese)

Kafka on the Shore