Banker to The Poor (Paperback)

Banker to The Poor (Paperback)

Summary Of The Book
In 1974, Professor Yunus took his students on a field trip to a nearby village. There, they spoke to a woman who made stools out of bamboo to support her family. That woman explained her difficulty in getting money for her small business. No bank would loan her money and she had to borrow from the local moneylender which left her with just a tiny margin of profit. She was unable to earn enough to support her family. The amount she needed was so small, yet she could not borrow the amount from sources that would charge her less interest. Professor Yunus lent her some money, then undertook a study to find out how many people were in such desperate situations.

When he found that these sort of tiny loans could help a huge number of people, he set out to do something about it. He had an uphill task as he had to convince the banking sector and bureaucrats that this was a scheme worth trying. Finally, he established the Grameen Bank in 1983, which extended microcredit to poor people in need of small loans.
The Grameen Bank decided to target women who could benefit from these loans. Women found it hard to secure loans, but once they started to earn, their earnings helped their family. The professor found that women automatically focused on and planned for their families when they had money in their hands, which was not always the case with men who secured such loans. He thus set a target of at least 50 per cent female customers for the bank. Currently, up to 97 per cent of Grameen Bank’s customers are women.

The idea of the Grameen Bank and microcredit soon found acceptance worldwide. The concept has been extended to 58 other countries, and Professor Yunus won the Nobel Peace Prize. The film rights to Banker To The Poor has been bought by an Italian film company and Director Marco Amenta is working on the script for the movie.

About The Authors
Muhammad Yunus is a Bangladeshi Economist. He is also the author of Building Social Business: The New Kind of Capitalism That Serves Humanity's Most Pressing Needs and Creating a World Without Poverty: Social Business and the Future of Capitalism.

Muhammad Yunus was born in 1940 in Chittagong, Bangladesh. After completing his postgraduate degree, he became a research assistant at the Bureau of Economics. He received a Fulbright Scholarship to study for his doctorate at Vanderbilt University. After the Bangladesh Liberation War, he returned to his country, and later became a Professor at Chittagong University. It was during this period that he got the idea of extending small loans to the poor. His idea became a success, he established the Grameen Bank, and won the Nobel Peace Prize in 2006.

Alan Jolis is an American journalist and writer. Alan Jolis lives in Sweden. He is a journalist and has written for leading publications like The Wall Street Journal, Vogue, and The International Herald Tribune.

Creating a World Without Poverty 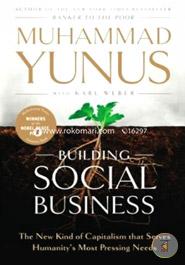