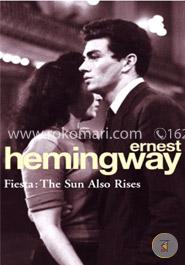 'Fiesta : The Sun Also Rises' Summary of the book
Set in the 1920s, the novel deals with a group of aimless expatriates in France and Spain. They are members of the cynical and disillusioned post-World War I Lost Generation, many of whom suffer psychological and physical wounds as a result of the war. Two of the novel’s main characters, Lady Brett Ashley and Jake Barnes, typify this generation. Lady Brett drifts through a series of affairs despite her love for Jake; she and Jake are unable to consummate their love, because of a war wound that rendered him impotent. Friendship, stoicism, and natural grace under pressure are offered as the values that matter in an otherwise amoral and often senseless world. (britannica.com)

Ernest Miller Hemingway (July 21, 1899 – July 2, 1961) was an American novelist, short story writer, and journalist. His economical and understated style had a strong influence on 20th-century fiction, while his life of adventure and his public image influenced later generations. Hemingway produced most of his work between the mid-1920s and the mid-1950s, and won the Nobel Prize in Literature in 1954. He published seven novels, six short story collections, and two non-fiction works. Additional works, including three novels, four short story collections, and three non-fiction works, were published posthumously. Many of his works are considered classics of American literature. Hemingway was raised in Oak Park, Illinois. After high school, he reported for a few months for The Kansas City Star, before leaving for the Italian front to enlist with the World War I ambulance drivers. In 1918, he was seriously wounded and returned home. His wartime experiences formed the basis for his novel A Farewell to Arms (1929).

The Old Man and The Sea (Award-Winning Authors' Books)