Introduction to the Interpretation of Statutes (Paperback)

Introduction to the Interpretation of Statutes (Paperback)

The importance of this subject within the framework of legal studies cannot be over-emphasised. The courts have to administer justice according to law. The chief source of law is legislation. The other sources are precedents and customs. Every source of law finds its expression in a langauge. A language is the property of the people and not that of law, though some words may acquire special legal meaning and may become a part of the legal terminology. But by far, a great bulk of the words used in a legal draft belongs to the ordinary language. What meaning is to be given to a word used in a legislation, custom or precedent or in a private deed or will? Even the dictionary does not give the clear meaning of a word. It gives several alternative meanings applicable in different contexts and for different purposes so that no clear field for the application of a word can be identified. As long as expansion of meaning takes place uniformly, the law will develop along healthy lines. But if one judge takes the narrow view and another, a broad view, the law will mean different things for different persons and soon there will be race for window shopping for justice. Hence, it is necessary that there should be some rules of interpretation to ensure just and uniform decisions. Such rules are called the rules of interpretation. They are the subject-matter of this brief introductory work.

The rules of interpretation are drawn from the general scope and intention of the instrument or legislation, from the nature of the transaction or the circumstances, from the legal rights of the parties independent of the instrument or law in question, and from many other relevant particulars. Interpretation is the process which is adopted for determination of the meaning of a writing, to determine from its known elements its true meaning or the intent of the framers of the documents. It is the art of finding out the true sense of any form of words, the sense which their author intended to convey. This art enables others to derive from the words the same idea which the author intended to convey and thereby to find out or collect the intention of a writer. The process involved is such that one source speaks something and another source picks it up, discovers its meaning and applies it to do justice between others. It is not a science but an art to find out the meaning of words in the context of a given situation. It is to this field of art that the present study is dedicated to enable those who are interested in knowing the elements of the subject. 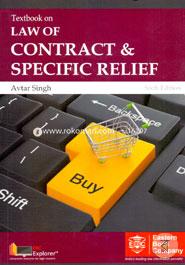 Textbook on Law Of Contract and Specific Relief

Principles of The Law of Evidence

Textbook on Law of Contract and Specific Relief, 7th Edition