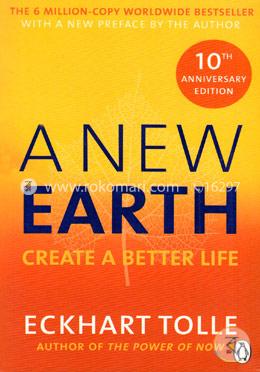 Summary Of The Book
This book serves as a follow-up book to the author’s bestselling 1999 book, The Power Of Now, which promoted the idea that in order to achieve lasting happiness, human beings must learn to dissociate their thoughts from their identities. A New Earth: Create A Better Life builds extensively upon the same primary theme, exploring a different perspective this time around.

The first book had an introspective quality and focused on the spiritual needs of the individual. On the other hand, this book turns the spotlight outwards, choosing to highlight the ways in which an individual’s spiritual evolution can be instrumental in shaping humanity’s collective spiritual consciousness.

Divided into ten chapters, the book begins with a chapter on the awakening of human consciousness. The next three chapters focus on the concept of ego, exploring how attachment towards one’s thoughts, memories, and possessions can give rise to an illusory and harmful sense of self.

In the subsequent chapters, the author discusses concepts such as recurring emotional pain, the space of consciousness, and inner and outer purpose. The final chapter presents the three elements that the author considers to be collectively representative of an awakened consciousness.

A New Earth: Create A Better Life was first published in 2005 by Penguin. It went on to receive high worldwide acclaim, its popularity scaling further when it was chosen as a recommended title by Oprah Winfrey’s Book Club in 2008. This edition is a 2009 reprint by Penguin Books.

About Eckhart Tolle
Eckhart Tolle is a German-Canadian author and public speaker.
He has written books such as Guardians Of Being, A New Earth: Awakening To Your Life’s Purpose, The Power Of Now: A Guide To Spiritual Enlightenment, Oneness With All Life: Inspirational Selections from A New Earth, and Stillness Speaks: Whispers of Now.
Distinctly permeated by a highly spiritual quality, Tolle’s writing explores psychology, metaphysics, and other realms of the esoteric.

Tolle was born as Ulrich Leonard Tolle in 1948 in Germany. He had a very turbulent and disturbed childhood. With the consent of his father, he chose to study language, literature, and astronomy at home instead of attending high school. After a brief teaching stint in London, he went on to study literature, psychology, and philosophy at the University of London. After graduation, Tolle joined Cambridge University on a research scholarship. A profound inner transformation at the age of 29 saw him eventually turning into a spiritual teacher and counselor. He spreads his teachings through his company, video website, speeches, and workshops, choosing to steer clear of undue focus on commercial motivation. Given the fact that his work focuses on spirituality, he has supporters and detractors in equal measure. In 2011, Watkins Review listed him at 1st place in the "100 most spiritually influential person in the world".

Eckhart Tolle (born Ulrich Leonard Tölle, February 16, 1948) is a spiritual teacher. He is a German-born resident of Canada best known as the author of The Power of Now and A New Earth: Awakening to Your Life's Purpose. In 2008, The New York Times called Tolle "the most popular spiritual author in the United States". In 2011, he was listed by Watkins Review as the most spiritually influential person in the world. Tolle is not identified with any particular religion, but he has been influenced by a wide range of spiritual works. Tolle said he was depressed for much of his life until age 29 when he underwent an "inner transformation". He then spent several years wandering "in a state of deep bliss" before becoming a spiritual teacher. He moved to Vancouver, British Columbia in 1995 and currently divides his time between Canada and California. He began writing his first book, The Power of Now, in 1997 and it reached The New York Times Best Seller list in 2000. The Power of Now and A New Earth sold an estimated three million and five million copies respectively in North America by 2009. In 2008, approximately 35 million people participated in a series of 10 live webinars with Tolle and television talk show host Oprah Winfrey. In 2016, Tolle was named in Oprah's SuperSoul 100 list of visionaries and influential leaders.

Practicing The Power Of Now