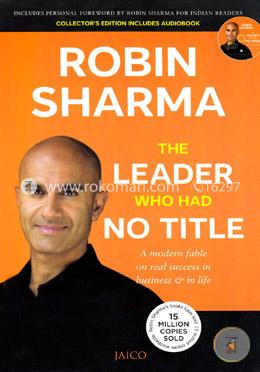 What are the qualities that a leader must possess? How can one be a leader? The Leader Who Had No Title (With CD) provides insights into such questions, thus portraying the basic needs to be a good and popular leader.

Robin S. Sharma has used a story to explain his theories and ideology. Blake Davis, a character in the book, is an employee in a bookstore. He learns the skills of leadership from five different people. First, he meets Tommy, who shows him how a person without any title can be a leader. He also explains the ten human regrets and ten human victories that differentiate between an average life and an exceptional life.

Tommy introduces Blake to four people who inform him what leadership is all about. The group includes Anna, a member of the housekeeping staff of a star hotel, Ty Boyd, a ski champion, Jackson Chan, a successful businessman, and Jet Brisley, a massage therapist. All four give Blake acronyms. These acronyms define the concept of leadership through different principles.

Slowly, Blake realizes that in order to be a leader, one must lead himself and develop his own thoughts and actions. Innovation and thinking must be brought in, as a leader must never behave like a subordinate. He must build his own image and thereby explore beyond his capabilities. The principles of becoming a good leader become clearer to him as the book progresses. The Leader Who Had No Title (With CD) covers skills that involve handling responsibilities like building relationships, finding one’s strong points, and finally becoming a stronger person, and proves that to be a good leader, you do not require any title.

Born in 1964, Sharma received his LLB from Dalhousie University School of Law. He is also the founder of Sharma Leadership International Inc., which is based in Toronto, Canada. He was ranked 7th on the International Leadership Professional Gurus list in 2012.

The Monk Who Sold His Ferrari