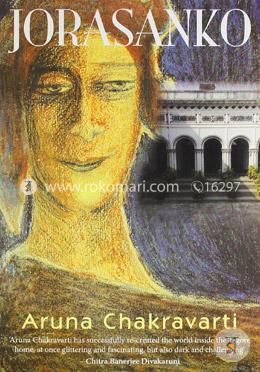 "Jorasanko" Summary Of The Book
Chakravarti’s Jorasanko is set in the famous Jorasanko house. It is a place of intellectual and cultural nourishment, where the women add a breath of fresh air to the free thinking spirit of the house. The plot of Jorasanko is set against a patriarchal culture, where domineering mother-in-laws and child marriages are common place.

Readers first get a glimpse of Digambari, a formidable woman who banishes Rabindranath’s grandfather because of his fraternizing habits and lack of religious scruples. Then the author introduces Sarada Sundari, a mother of 14 children, one of which was Rabindranath. Sundari is depicted as a sexually obsessed woman who did not subscribe to her husband’s philosophies. Then a daring woman named Jnanadanandini, enters the picture. She is a woman who changes the way the sari is worn, at the expense of alienating the generation before her.

Chakravarti defines the tales of the Tagore women by unravelling a series of mini plots. For instance, a bride’s jewellery is removed and given away to another bride, when her father is unable to provide with an adequate dowry. To this, Chakravarti adds in a mixture of big house politics, inter-sibling rivalry, and typical sister-in-law wars, to create her memorable masterpiece.

Throughout the book, readers will get an intimate glimpse into Bengali culture and particularly their language, with terms such as ‘jobba’, ‘khamta naach’, and ‘ghumta’. By writing this book, Chakravarty manages to leave a lasting legacy of the Tagore household.

About Aruna Chakravartiu
Aruna Chakravarti is an author, translator, and educator.
She has written other titles such as Srikanta, First Light, Songs of Tagore, The Inheritors, and The Way Home.
Chakravarty earned her Ph.D. in English Literature, from Delhi University. She began teaching at Delhi University, and also taught a Janki Devi Memorial College, where she eventually retired as its Principal. Chakravarti received the Sahitya Akademi Award for her translation of the book Srikanta. She was also shortlisted for the Commonwealth Writers Prize in 2004. She has also won other awards like the Sarat Puraskar and the Vaitalik Award.