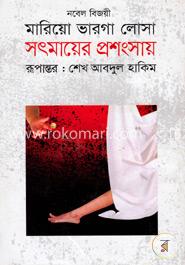 Jorge Mario Pedro Vargas Llosa, 1st Marquis of Vargas Llosa (born March 28, 1936), more commonly known as Mario Vargas Llosa, is a Peruvian writer, politician, journalist, essayist, college professor, and recipient of the 2010 Nobel Prize in Literature. Vargas Llosa is one of Latin America's most significant novelists and essayists, and one of the leading writers of his generation. Some critics consider him to have had a larger international impact and worldwide audience than any other writer of the Latin American Boom. Upon announcing the 2010 Nobel Prize in Literature, the Swedish Academy said it had been given to Vargas Llosa "for his cartography of structures of power and his trenchant images of the individual's resistance, revolt, and defeat". Vargas Llosa rose to fame in the 1960s with novels such as The Time of the Hero (La ciudad y los perros, literally The City and the Dogs, 1963/1966), The Green House (La casa verde, 1965/1968), and the monumental Conversation in the Cathedral (Conversación en la catedral, 1969/1975). He writes prolifically across an array of literary genres, including literary criticism and journalism. His novels include comedies, murder mysteries, historical novels, and political thrillers. Several, such as Captain Pantoja and the Special Service (1973/1978) and Aunt Julia and the Scriptwriter (1977/1982), have been adapted as feature films.