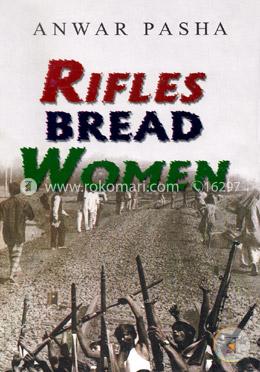 Rifles Bread Women admirably projects the essential spirit of the Bangladesh liberation war and clearly shows the causes and circumstances that made it inevitable, giving a graphic description of the killings, lootings and mass destruction perpetrated by the Pakistani army when it unleashed on the unarmed civilian population of Bangladesh a genocide of unimaginable proportions. The novel vividly portrays many characters and scenes which enable the reader vicariously to feel the anxiety, anguish, grief as well as the anger, hope and determination generated in the mind of the Bengalees after the holocaust of March 25, 1971.
The actual events dealt with in the novel do not cover more than three days in the last week of March 1971. They do not go beyond the confines of the beleaguered city of Dhaka, but through conversations and reminiscences they take the reader further back and reveal to him the injustices done to the people of the then East Pakistan by the dictatorial regimes of Ayub, Yahya and others. The novel refers to the inspiring role of Bongobondhu Sheikh Mujibur Rahman and speaks of the impact of his now famous speech of March 7, 1971. ...
... one might call it a docu-novel. However, it undoubtedly reaches the level of a successful creative work by virtue of the author's many achievements. It is rich in characterisation. And it eschews exaggeration, sloppy sentimentalism and lurid melodrama. If anything, the author presents his theme in a low key and consistently endeavors to maintain a proper perspective. ...

Anwar Pasha was born in the village Dabkai in Murshidabad . He passed the High Madrassah examination in 1946 then went on to do his BA and then his MA in Bengali from Calcutta University in 1953. He started his career as teacher of Manikchak High Madrasah and later on taught at Bhabta Azizia High Madrasah in 1954 and Sadikhan Diar Bohumukhi Higher Secondary School in 1957. In 1958 he joined Pabna Edward College and in 1966 he joined Department of Bengali, Dhaka University. In 1971 just before a few days of 16 December, he was picked up from his university flat by Pakistan Army and its collaborators (the Al-Badr militia led by Matiur Rahman Nizami), and taken to Mirpur, where he along with other intellectuals was executed. His dead body was recovered later.
Pasha's literary career started when he was a student at Calcutta University. At that time, he published "Hasnahena", an anthology of several literary essays. He later moved to writing short stories, novels, essays, and poems. With Muhammad Abdul Hai, he also edited and published four medieval Bengali epics.

About Translator:
Kabir Chowdhury (1923-2012) is a noted translator, critic and essayist. His elegant and lively English translation of Bengali poems, novels and short stories have been widely acclaimed at home and abroad.
He has received many national and international awards for his contributions in the field of literature and peace

Tales From Bangladesh Fish On A Tree