The Sense of An Ending (Man Booker Prize 2011) (Paperback) 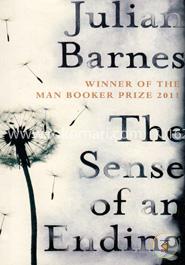 The Sense of An Ending (Man Booker Prize 2011) (Paperback)

'The Sense of An Ending' Informition of the book
The Sense of an Ending is a 2011 novel written by British author Julian Barnes. The book is Barnes' eleventh novel written under his own name (he has also written crime fiction under the pseudonym Dan Kavanagh) and was released on 4 August 2011 in the United Kingdom. The Sense of an Ending is narrated by a retired man named Tony Webster, who recalls how he and his clique met Adrian Finn at school and vowed to remain friends for life. When the past catches up with Tony, he reflects on the paths he and his friends have taken. In October 2011, The Sense of an Ending was awarded the Man Booker Prize. The following month it was nominated in the novels category at the Costa Book Awards.

Julian Patrick Barnes (born 19 January 1946) is an English writer. Barnes won the Man Booker Prize for his book The Sense of an Ending (2011), and three of his earlier books had been shortlisted for the Booker Prize: Flaubert's Parrot (1984), England, England (1998), and Arthur & George (2005). He has also written crime fiction under the pseudonym Dan Kavanagh. In addition to novels, Barnes has published collections of essays and short stories. In 2004 he became a Commandeur of L'Ordre des Arts et des Lettres. His honours also include the Somerset Maugham Award and the Geoffrey Faber Memorial Prize.