Harry Potter and the Order of the Phoenix -5 (Paperback) 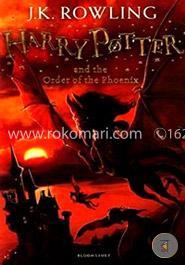 Harry Potter and the Order of the Phoenix -5 (Paperback)

Dumbledore lowered his hands and surveyed Harry through his half-moon glasses. 'It is time,' he said, 'for me to tell you what I should have told you five years ago, Harry. Please sit down. I am going to tell you everything.'

Harry Potter is due to start his fifth year at Hogwarts School of Witchcraft and Wizardry. He is desperate to get back to school and find out why his friends Ron and Hermione have been so secretive all summer. However, what Harry is about to discover in his new year at Hogwarts will turn his whole world upside down . . .

But before he even gets to school, Harry has an unexpected and frightening encounter with two Dementors, has to face a court hearing at the Ministry of Magic and has been escorted on a night-time broomstick ride to the secret headquarters of a mysterious group called ?The Order of the Phoenix?. And that is just the start.
A gripping and electrifying novel, full of suspense, secrets, and ? of course ? magic.

About The Author
Legend has it that J.K. Rowling was a struggling single mother when she wrote the beginning of Harry Potter and the Sorcerer's Stone, on scraps of paper at a local cafe. But her efforts soon paid off, as she received an unprecedented award from the Scottish Arts Council enabling her to finish the book. Since then, the debut novel has become an international phenomenon, garnering rave reviews and major awards, including the British Book Awards Chidren's Book of the Year and the Smarties Prize.