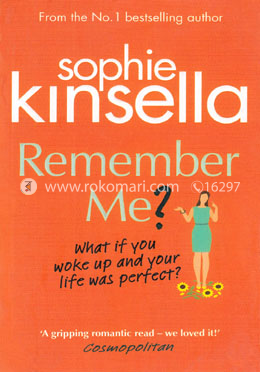 When Lexi recovers from an accident, she discovers that the last three years of her life have been erased from her memory. She sees herself as a twenty-five year old girl with crooked teeth and an uneventful life, so she is quite stunned to learn that she is twenty-eight, married to a rich, good looking man, and is also the head of her department at work. But even as she gets acquainted with her new-found perfect life, she realizes that a lot has been lost to achieve it.

Packed with twists and turns, Lexi’s story unfolds as she is thrown into more confusion with the arrival of a new man in her life who claims to be her lover. In Remember Me?, bestselling author Sophie Kinsella narrates the intriguing tale of a woman’s quest for a better life.

She has written a number of popular books under her pen name, including The Secret Dreamworld Of A Shopaholic, The Undomestic Goddess, and Can You Keep A Secret?. She has also released books under her real name. These include The Tennis Party, Sleeping Arrangements, and Swimming Pool Sunday.

Kinsella was born in London in 1969. After graduating in Politics, Philosophy, and Economics (PPE), she briefly worked as a financial journalist. Her first book, The Tennis Party, came out in 1995 and she has since become an internationally bestselling writer.

Can You Keep a Secret?

The Secret Dreamworld of a Shopaholic