Literature of Bangladesh and Other Essays (Hardcover) 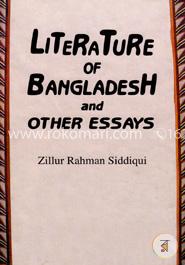 Literature of Bangladesh and Other Essays (Hardcover)

This volume of miscellaneous essays attempt at a critical survey of the very first phase of our literature of Bangladesh. The themes of the essays are mainly literary and cultural. One thing about this book: the first essay is distinct from the rest. It is not only wider in its scope and larger in size compared to the other and much shorter pieces. Careful readers will surely detect, here and there, slightly discordant views expressed on the same subject. However, that disagreement of fundamental nature will be found between views and assessments expressed in different essays.
Prof. Zillur Rahman Siddique’s elegant style of language will be enjoyable for advance literary reader.
Zillur Rahman Siddiqui
, (b. 1928) had his education in Kolkata (Presidency College), Dhaka and Oxford University. As a teacher of English Literature, he has taught of Rajshahi University,–over 18 years,–followed by Jahangirnagar University, for over 24 years. At the latter place, he also served as Vice-Chancellor for two terms, 1976-84. He was adviser to the president of the Caretaker government of Justice Shahabuddin Ahmed and was in-charge of the ministry of Education (winter of 1990-91).

Prof. Siddiqui author of over 30 books. He is a poet, a critic, a translator (Shakespeare and Milton in particular) an editor of, among other books, Bangla Academy English-Bengali Dictionary. Special mention can be made of his excellent autobiography, Amar Chawlar Pathey. His collected works–Rachanabali–in 5 volumes–is now available in 3 volumes; later volumes are forthcoming. Prof. Siddiqui is a recipient of several awards,–Bangla Academy Award for poetry, 1977, among others. The latest is Swadhinata Puroshkar (Independence Award), 2010. He now lives a life of retirement at Banani, Dhaka