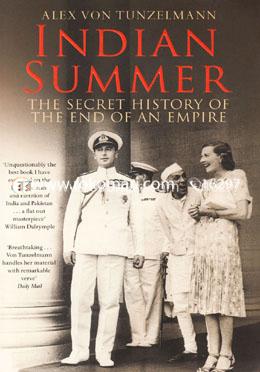 Summary Of The Book
400 million Indians were liberated at the stroke of midnight on 15th August, 1947. The British Empire withdrew from the country with a grand party. What was happening behind the scenes? Who all were involved in shaping India’s new and free future? Alex Von Tunzelmann answers all these questions in this brilliantly insightful book Indian Summer: The Secret History Of The End Of An Empire. It was one of the significant moments of not just Indian history, but world history as well.

This book recreates the defining moments of twentieth century Indian history that includes the Partition, the Independence, and the final days of the British Raj. It is an accurate account of how a handful of people changed the lives of millions. These include Louis and Edwina Mountbatten, the couple appointed to end the British Raj in India at the earliest, Jawaharlal Nehru, the Prime Minister to be, and Gandhi, a mystical leader who enchanted the entire nation.

Indian Summer: The Secret History Of The End Of An Empire equally focuses on various other peripheral characters such as Mohammed Ali Jinnah and Patel, who had a role in this major event. This vivid historical account chronicles the events which tore apart the greatest empire ever, through the players who made it happen. It further unveils the secrets of these players and talks about the private deals, the dreadful conflict in Kashmir, the Cold War conspiracies, and the personal drama that unfolded as a clandestine love affair ignited between Nehru and Edwina Mountbatten.

Several things changed after the British Raj withdrew from India and it led to intense turmoil in a free society. Britain didn’t remain a superpower anymore after the loss of India. The two newly formed countries, India and Pakistan, descended into terror and anarchy. And most importantly, this one decision led to the death of one million people and the dispossession of over ten million. Indian Summer: The Secret History Of The End Of An Empire is a spellbinding tale of history, romance, and divided loyalties, written with wit and a sharp eye for detail. Alex Von Tunzelmann, in an astute manner, relates how a few extraordinary people determined the fate of nations and changed the world for ever.

About Alex Von Tunzelmann
Alex Von Tunzelmann is a British historian and author. Another of Alex Von Tunzelmann’s book is Red Heat: Conspiracy, Murder, And The Cold War In The Caribbean. Tunzelmann was born in 1977 and she studied history at University College, Oxford. She edited Isis and Cherwell. She has also contributed as a writer to various books. She is a regular columnist for The Guardian and writes a column called Reel History that deals with films based on history. She has been awarded with the Financial Times Young Business Writer of the Year. At present, she lives in London and works as a researcher.

Indian Summer: The Secret History Of The End Of An Empire