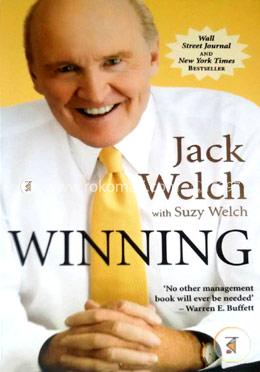 Summary Of The Book
Winning, published in 2010, is a self-help management guide to help readers find answers to some of the most difficult questions of their professional lives. Winning starts off with an introduction, where Jack Welch says that the most commonly asked question is, What does it take to win?

The first part of the book, Underneath It All, describes Jack’s management philosophy. The author says that an organization should take ideas from every level, and not just the top leaders. The next part is titled Your Company, and focuses on the inner working of an organization. The authors speak about leadership, hiring, how to part ways, and crisis management. Your Competition is the third portion of Winning, and it speaks about the world outside of an organization.

Readers will learn how to devise meaningful budgets, grow through mergers and acquisitions, create strategic advantages, and make use of Six Sigma. In Your Career, the authors encourage readers to find the right job, to understand what it takes to get promoted, and learn how to handle a bad boss. Winning also says that maintaining a good work-life balance is essential. The last part, Tying Up Loose Ends, answers nine questions that do not fall in the above categories, like managing the China threat.

Winning is filled with personal stories and experiences, and has been written with a no-nonsense attitude. This book offers no easy solutions on how to win, as there really are none. This guide was on the top of The Wall Street Journal bestseller list, and has also been on The New York Times' bestseller list.

About The Authors
John Francis Welch, Jr., popularly known as Jack Welch, was born in 1935. He is an American author, and former chairman and CEO of General Electric.

Welch graduated in 1957 from the University of Massachusetts with a BSc. in Chemical Engineering. He then completed his MS and Ph.D from the University of Illinois. In 1960, Welch joined GE as a junior engineer. In 1981, he became GE's youngest chairman and the CEO. He retired in 2001. He now teaches at the MIT Sloan School of Management, and was also the co-author of a popular The New York Times syndicated column. In 2009, the author founded the Jack Welch Management Institute. Welch was named as the manager of the century by Fortune in 1999.

Suzy Welch, born in 1959, is an author, journalist, and television commentator.

She has written 10-10-10: A Life Transforming Idea and Winning: The Answers.

Welch graduated from Harvard Business School, and worked as a reporter. She later became the editor-in-chief of the Harvard Business Review. Her column has been published in over forty newspapers worldwide. She is a commentator on shows like Good Morning America and Your World With Neil Cavuto, and is married to Jack Welch.

John Francis "Jack" Welch Jr. (born November 19, 1935) is an American business executive, author, and chemical engineer. He was chairman and CEO of General Electric between 1981 and 2001. During his tenure at GE, the company's value rose 4,000%. In 2006, Welch's net worth was estimated at $720 million. When he retired from GE he received a severance payment of $417 million, the largest such payment in history.

The Real-Life MBA: Your No-BS Guide to Winning the Game, Building a Team, and Growing Your Career