Wings of Fire An Autobiography With Arun Tiwari(NO.1 BESTSELLER) (Paperback) 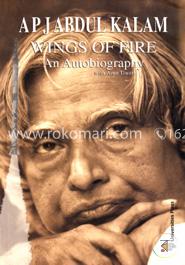 Wings of Fire An Autobiography With Arun Tiwari(NO.1 BESTSELLER) (Paperback)

Preface
This might seem to disqualify me as his biographer, and I certainly had no notion of being one. One day, while speaking to him, I asked him if he had a message for young Indians. His message fascinated me. Later, I mustered the courage to ask him about his recollections so that I could pen them down before they were buried irretrievably under the sands of time. We had a long series of sittings late into the night and early under the fading stars of dawn-all somehow stolen from his very busy schedule of eighteen hours a day. The profundity and range of his ideas mesmerized me. He had tremendous vitality and obviously received immense pleasure from the world of ideas. His conversation was not always easy to follow, but was always fresh and stimulating. There were complexities, subtleties, and intriguing metaphors and subplots in his narrative, but gradually the unfolding of his brilliant mind took the form of a continuous discourse. When I sat downto write this book, I felt that it required greater skills than I possessed. But realising the importance of this task and regarding it an honour to have been permitted to attemptit, I prayed earnestly for the courage and calibre to complete it. This book is written for the ordinary people of India for whom Dr Kalam has an immense affection, and of whom Dr Kalam is certainly one. He has an intuitive rapport with the humblest and simplest people, an indication of his own simplicity and innate Spirituality. For myself, writing this book has been like a pilgrimage. Through Dr Kalam, I was blessed with the revelation that the real joy of living can be found in only one way-in one's communion with an eternal source of hidden knowledge within oneselfwhich each individual is bidden to seek and find for himself or herself. Many of you may never meet Dr Kalam in person, but I hope you will enjoy his company through this book, and that he will become your spiritual friend. I could include in this book only a few incidents among the many narrated to me by Dr Kalam. In fact, this book provides only a thumbnail sketch of Dr Kalam's life. It is quite possible that certain important incidents have been inadvertently dropped and that the contribution of some individuals to the projects coordinated by Dr Kalam has gone unrecorded. Since a quartercentury of professional life separates me from Dr Kalam, some important issues might also have remained unrecorded or have been distorted. I am solely responsible for such shortcomings, which are, of course, completely unintentional.
Arun Tiwari