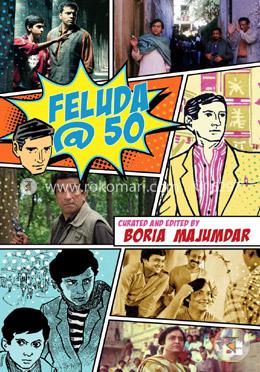 'Feluda 50' Summary of the book
In 1965, Satyajit Ray, drawing from the detective tradition made popular by characters such as Sherlock Holmes and Hercule Poirot, created a character who would go on to influence Bengalis of an entire generation: Feluda. And when Soumitra Chatterjee played the dapper detective in the film Sonar Kella, a cult was born. Fifty years later, the cult endures. Every new Feluda film has the box office in a tizzy.
[email protected] seeks to explore the phenomenon. What makes Feluda tick? What is it that we love about this man? Why is it that every Feluda film continues to run to packed houses for weeks and months on end in an otherwise struggling Bengali film industry? What is the way forward for the franchise in the years to come? What role do Feluda's sidekicks, Topshe and Lalmohan-babu, play? The book also delves deep into Ray's motivations for keeping Feluda cocooned from contemporary politics and never allowing him to have a love interest.
Also including in-depth interviews with the three stars who have played Feluda onscreen, this is the quintessential fan tribute and a celebration of Feluda on the occasion of the sleuths fiftieth anniversary.(goodreads.com)