You Can Heal Your Life (Paperback) 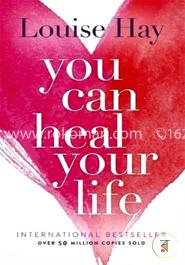 You Can Heal Your Life (Paperback)

'You Can Heal Your Life' Summary of the book
The key premise of the book is that because the mind and body are connected, illnesses of the body somehow have their root causes in emotional and spiritual aspects of the mind and its beliefs and thought processes. While modern medicine concerns itself with eliminating symptoms of disease in the body, using tools such as chemotherapy and other pharmaceutical drugs and various surgical techniques, Hay's approach is to identify and work to resolve what she perceives as the mental root causes of disease. Hay believes that the causes of "dis-ease" include stress and unhealthy thought patterns and beliefs about oneself, and postulates that the most fundamental way to affect positive change in the body is to change the way we think, using tools such as "mirror work" and affirmations. At the end of book, a separate section lists numerous illnesses and various emotional thought patterns that Hay believes causes them; this was derived from Hay's earlier book, Heal Your Body, which had its origins in a pamphlet she published in 1979. (wikipedia.org)

You Can Heal Your Life