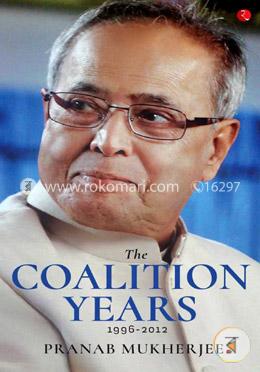 The Coalition Years begins its journey in 1996 and explores the highs and lows that characterized sixteen years of one of the most tumultuous periods in the nation's political history. It is an insightful account of the larger governance phenomenon in India-coalition politics-as seen through the eyes of one of the chief architects of the post-Congress era of Indian politics.

From the inexplicable defeat of the Congress in the 1996 general elections and the rise of regional parties like the TDP and the TMC, to the compelling factors that forced the Congress to withdraw support to the I.K. Gujral government and the singular ability of Sonia Gandhi to forge an alliance with diverse political parties that enabled the Congress to lead the coalitions of UPA I and II, Pranab Mukherjee was a keen observer and an active participant in the contemporary developments that reshaped the course of the country's political, economic and social destiny.

Beyond the challenges, complications and compulsions of coalition governments, this book is also a recollection of Mukherjee's journey as the Cabinet Minister in the key ministries of defence, external affairs and finance, beginning from 2004. He recounts each of these events with candour-the path-breaking meeting with Henry Kissinger in 2004 that altered the course of the Indo–US strategic partnership, his timely advice to Bangladesh Army Chief Moeen Ahmed in 2008 that led to the release of political prisoners there and the differing views with RBI Governor D. Subbarao on the structure of the FSDC.

The third volume of Mukherjee's autobiography is a sharp and candid account of his years at the helm. It offers the most authoritative account of contemporary Indian politics by one of the tallest leaders and statesmen of our generation.

Pranab Mukherjee was the 13th President of India. A man of unparalleled experience in governance, he has the rare distinction of having served at different times as Foreign, Defence, Commerce and Finance Minister. He was elected to the Upper House of the Parliament (Rajya Sabha) five times from 1969 and twice to the Lower House of the Parliament (Lok Sabha) from 2004. He was a member of the Congress Working Committee, the highest policy making body of the Party for a period of 23 years. A powerful orator and scholar, Shri Mukherjee’s intellectual and political prowess as well as remarkable knowledge of international relations, financial affairs and parliamentary process are widely admired. He has been acclaimed for his role as a consensus builder on difficult national issues through his ability to forge unity amongst the diverse political parties that form part of India’s vibrant multi-party democracy.