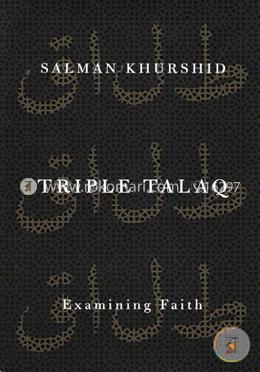 Information Of Flap:
"... India is blessed with several world religions and therefore no single religious establishment can be the counterpart of the secular edifice. Therefore, instead of keeping religion out of politics, we sensibly give equal respect to each religion. However, the question, as to what is religion remains ... The Triple Talaq case offered the opportunity to consider the very idea of religion, but the Court thought it appropriate not to dive into a metaphysical or philosophical exercise, limiting its attention to what might be described as the layman's religion. Yet somehow, it seems that drawing distinctions between the core or essential part of religion and the peripheral aspect cannot be attempted without an understanding of the nature of religion."

Triple talaq, or talaq-e-bidat, is one of the most debated issues in the Muslim world. From antiquity, the Muslim faith
has been plagued by the portrayal of Muslim men regularly misusing this perceived "right" to divorce their wives instantly by simply uttering "talaq” thrice. The Supreme Court of India, in the landmark judgment of Shayara Bano v. Union of India, has taken the step to declare this form of talaq unconstitutional and to
strike down its practice.
In Triple Talaq: Examining Faith, Salman Khurshid, who intervened to offer the court an amicus brief in the Triple Talaq case", offers a straightforward yet comprehensive
overview of this complicated issue. Explaining the reasons behind the court's decision, he dives deep into other aspects of
this practice: why it is wrong; why it has thrived; what was the judicial history of this issue; what the Quran and Muslim religious leaders say about it; and what the comparative practices in other countries are. A handy guide to this landmark decision and what it means for Muslims in India, this book is written not just for the
theologian, but also for the common reader.
Salman Khurshid is a senior advocate in the Supreme Court of India.

The Other Side of the Mountain